YouTube influencers are creating a false narrative on YouTube about dental practices. Here’s what you can do to take back control. 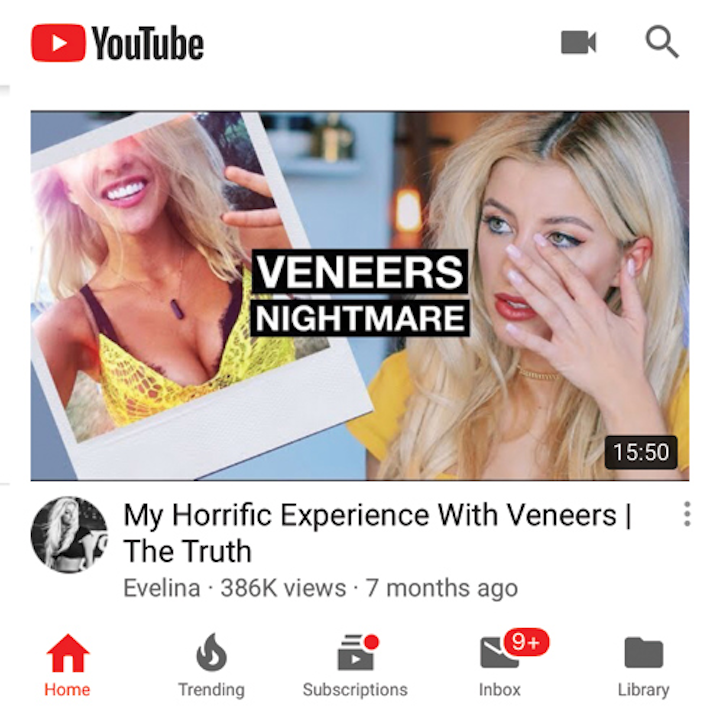 Have you ever seen the Netflix series Stranger Things? It’s a great piece of work. Here’s a quick summary of the series’ two seasons: There’s some sort of other-worldly force that is slowly creeping into a small town. It has started plowing out underground tunnels and sending snarling minions of evil to overtake our world through a flipped reality called the Upside Down. It’s spooky and eerie and awesome.

I have some terrible news, however, about the Upside Down. It’s no longer an element of fiction. If you’ve spent any time on YouTube lately, you’ve probably noticed the slow, inevitable creep of what have been termed YouTube influencers or YouTubers. They are proof that the Upside Down exists.

Who are these YouTube Influencers, and why are they a threat?

YouTube influencers are mostly young people who relay their opinions and experiences with varying frequency through episodic videos. They often don’t have formal education on the topics about which they are commenting. They simply know how to get and keep attention.

The successful YouTubers have figured out how to capture and keep the eyeballs of tens if not hundreds of thousands of viewers with every episode. They do this through clickbait—namely, the video titles and thumbnails that get you to click and view the videos. Then, they get you to click further and subscribe to their channels so they can keep sending you videos. Once you’ve subscribed, you receive push notifications every time these content creators release new videos.

I’ve seen a lot of these videos lately where these folks share their experiences when it comes to accepting dental treatment . . . and then complaining about what went wrong. For example, a user named Evelina published a video titled My Horrific Experience With Veneers | The Truth. The thumbnail shows a picture of Evelina, an attractive woman, crying. Through the video, she shares her personal story and appeals to viewers on an emotional level. It’s personal and anecdotal—closer to having coffee with a close friend than listening to a skilled and trained professional advisor. In today’s world, that sense of familiarity can have a significant impact on viewers. As of this writing, Evelina’s Veneers video has gotten nearly 400,000 views. 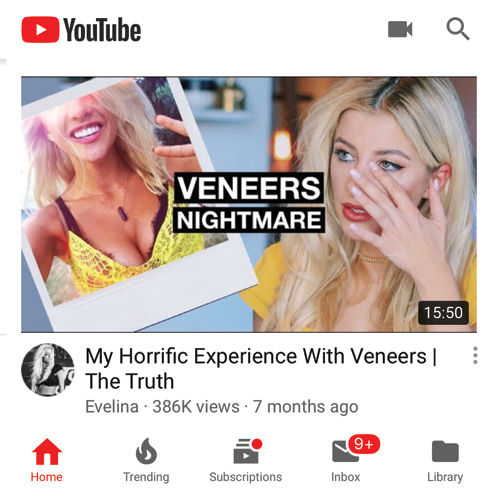 Why do they do it?

What is the motivation of Evelina and other influencers making these videos? Well, why does anyone do anything? YouTube relies on advertising revenue to make money. And to compensate those creating their content, they’ve implemented a profit-sharing model that rewards those who upload and publicize videos. The top influencers have cracked the code on how to get viewers to spend more time and log more views on their videos. Therefore, the influencers make more money. Their motives are self-fulfilling. They’re not interested in sharing true best practices. They don’t want to educate viewers about root canals or periodontal disease. They simply want to make money by being in the spotlight and getting their videos viewed.

Like a thick fog that slowly rolls in under the cover of darkness, you may not have noticed these people and their videos. But they are no longer just a novelty. Simply put, they have been laying a foundation to influence your patients’ opinions, and you could be losing serious revenue and patient trust as a result.

What can I do about this?

As an American and an advocate of freedom of speech on the internet, I don’t believe there’s anything wrong with people expressing their views or sharing their experiences on YouTube. It’s their right to do it and make money from it. They might not have the schooling or good intentions that you do, but frankly that’s irrelevant. What is important and the real problem is that they are controlling the narrative when it comes to your patients’ dental treatment. You might have years of education, decades of experience, and the respect of your colleagues and patients, but if you don’t know how to get in front of your patients (and potential patients) as effectively as the YouTube influencers, you’re losing the game. Unfortunately, that game involves both patient care and your livelihood.

Whereas you talk to your patients maybe twice a year, these people have the ability to communicate with those same patients on a weeklybasis via YouTube search, smartphone push notifications, emails, and text messages. Those are a lot of easy ways to reach people who you simply don’t have access to. Whether influencers are qualified or not, they have grabbed hold of your patients’ attention and aren’t letting go.

I would strongly suggest learning how to properly employ modern methods, such as producing effective and engaging YouTube videos, in your practice marketing efforts. If you don’t, you’re losing ground to people whose only advantage is their ability to attract attention. And truthfully, that’s not that hard to do on a regular basis.

So why not take control of what your patients watch and provide quality content right from your office? I guarantee you that you can do this, and it will only take an hour or less every week.

Here’s a quick, four-step process for how to produce quality video content for your channel:

1. Create a YouTube channel. This will be where you direct people to subscribe to your content and follow you. It’s basically your own internet TV station for your practice. This involves putting up some background photos, etc., but that’s easy to do—just post a picture of your staff or office.

2. Prepare to upload video. Connect with YouTube on your phone and practice uploading a video, as well as adding descriptions and tags. If you have any questions on how to do it, just Google “How to upload a YouTube video” or “How to add a description to my YouTube video.”

3. Set up your space. Designate a spot in your office that looks good, and pick a time every week to film a two- to six-minute video about a topic relating to your patients.

4. Upload. For each video you upload to YouTube, add a description and keyword. Your keywords should be ones that your patients could be searching for, such as “Are veneers right for me?” or “Caring dentist in Chicago.”

While I don’t recommend you produce your videos on the same informal, personal level as YouTube influencers, you can still come across as friendly and engaging. Don’t worry so much about the setting, the background, or even production value. Instead, work on speaking to the iPhone, iPad, or camera as you would to a patient who is sitting in your chair. Be professional yet relatable and eliminate over-the-top clinical words that are confusing. Transparency is key.

Also, be sure to watch and reply to the comments that appear on your videos. I know dentists who have actually scored new patients through these comment threads. Ultimately, though, the purpose is to build rapport, increase trust, and demonstrate your expertise.

In a world full of fake news, media that are deemed honest and well intentioned gets consumed. (This includes YouTube videos.) Their creators are considered reliable. You have the opportunity to craft and control the message, and I suggest you take advantage of this new opportunity to start an ongoing conversation with your patients. It may seem stranger than what you’re used to, but if there’s a new world of patient-acquisition media out there, why not learn to use them to your advantage?