Using the existing prosthesis as a provisional restoration 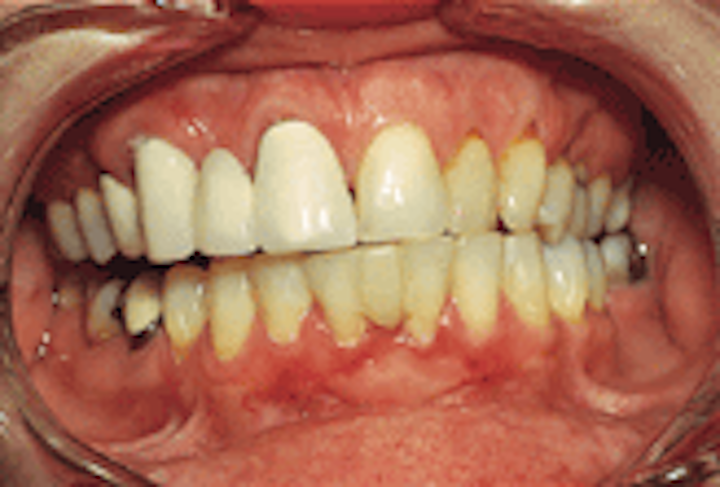 The advantages of using the existing prosthesis as a provisional restoration are:

1. The metal framework is strong;

2. The porcelain or metal is more wear-resistant than auto-cured, acrylic provisional restorations;

3. The porcelain is esthetically pleasing;

However, the whole removal of a cemented prosthesis is not predictable or without risks.

Williams, Portera and Stephens described a technique for removing a cemented prosthesis using a custom-made appliance that provides a maximum directional force for dislodgement.

Williamson and Breeding described a technique for removing a cemented prosthesis using a twisted 0.025-inch brass separating wire with a high-intensity, low-amplitude crown-remover. Loney described a technique of using serrated jaw forceps and thermoplastic adhesive crown-removers. Grundy and Jones described dislodging the prosthesis intact by feeding soft wire under the pontic or between the retainers, grasping the free ends of the wire with pliers and striking the pliers with a fist to create a dislodging force. Gallin described modifying a sliding hammer crown-remover by placing an O-ring on the shaft between the striker and the hammer, preventing metal-to-metal contact and subsequently reducing the shock to and vibration of the teeth and jaw.

Once removed, the prosthesis can be rebuilt to be used as a provisional or temporary prosthesis. The advantages of using the existing prosthesis are:

1. The long-span fixed partial denture is stronger with metal reinforcement;

2. The prosthesis incurs less occlusal wear with a metal or porcelain restoration vs. an acrylic restoration;

3. Less time is required for fabricating a temporary restoration.

The clinical example involved a 55-year-old woman in good health, whose prosthesis was loose on the maxillary-right canine abutment and whose periodontal tissues were severely inflamed (Figure 1). The treatment plan was to remove the prosthesis, excavate the caries present, remove the composite overhang and fabricate a provisional restoration to be worn during subsequent periodontal therapy. The existing fixed prosthesis was to be repaired and modified to provide a provisional restoration.

Using vertical strokes, I used a coarse-grit diamond bur to make a vertical slot in the porcelain of the mesial-central incisor retainer, penetrating into the underlying metal (Figure 2). Then I used a cross-cut, round-ended fissure bur in vertical strokes to remove the metal until the white cement layer was exposed.

Next, I used a 56 straight fissure bur (Figure 3) to square the existing half-round groove through the metal by holding the tip of the bur to square the vertical walls horizontally, creating a groove similar to that in the head of a screw. This preparation does not need to penetrate the cement layer.

I modified an angled oral-surgery elevator by grinding the end to a screwdriver configuration. The optimum dimensions are 1 mm thick and 4 mm wide, with sharp, square corners. A two-inch x two-inch gauze sponge was placed, so that the patient would not aspirate the fractured porcelain. The assistant held the high-speed suction close to the crown to catch the falling fractured pieces of porcelain. I warned the patient about the impending sound of the fracturing of the porcelain veneer. I placed the modified elevator in the groove (Figure 4) with my right hand and rotated it clockwise, then counterclockwise; my left hand stabilized the prosthesis and provided a rest for the modified elevator. I expanded the groove in the metal framework, until I noted both mesial and distal movement of the crown, which indicated that the cement seal was broken (Figure 5).

Using a high-speed handpiece, I removed the cement from the prosthesis and removed the incisal facial metal (Figure 6) from the central incisor framework, and I cut retention holes in the lingual (Figure 7) and mesial of the metal framework. I performed the post preparation, the post-pattern fabrication, the electrosurgery, the subgingival tooth preparation and the overhang removal in the conventional manner. For hemostasis, I placed a knitted retraction cord, soaked in ferric sulfate in the gingival sulcus, and applied the astringent to the cut tissue using a special syringe.

The preparations were rinsed and dried. The retainers of the existing prosthesis were air-abraded with a 50-micron aluminum oxide wherever the provisional acrylic was to be bonded. I placed a 0.050-inch-diameter temporary post of anodized aluminum in the canine-abutment post preparation, with the retention head just occlusal to the post preparation. I then placed a thin mix of autopolymerizing methylmethacrylate acrylic in or on the abutments and seated the prosthesis. Without delay, I placed acrylic in the central-incisor area of a previously fabricated, clear-plastic vacuum matrix and seated it over the prosthesis. The acrylic was allowed to set to a tacky, semipolymerized state, and I teased the prosthesis and matrix on and off by lifting it (Figure 8) approximately 1-2 mm coronally and then reseating it until the acrylic was set completely.

The patient now was ready to undergo periodontal therapy.

The technique of sectioning the metal framework and spreading the grooved retainer to break the cement seal involves little risk of natural tooth damage. The existing prosthesis can be repaired and modified to be used as an acceptable provisional restoration. The periodontist can remove the provisional restoration during surgery for greater access to the surgical site. The strong, metal framework makes a durable provisional prosthesis, strong enough to last throughout periodontal treatment and the subsequent healing period. The rigid, metal-supported prosthesis has less flexure than an acrylic prosthesis, which means less temporary cement washout. The porcelain and metal occlusal surfaces prevent provisional-prosthesis wear and abutment supraeruption. The use of the existing prosthesis saves clinical time during fabrication, as well as maintenance and repair visits, while the provisional prosthesis is being worn.

According to Howard S. Glazer, DDS, FAGD, SDI's new nanohybrid composite Luna allows us to truly prove that dentistry is both an art and science.
Sep 20th, 2019

Which crown goes where?

The effect of temporary cements in creating esthetic provisional restorations

What type of crown should I use?

Your accountant may be wrong about new technology

As dentists, we often ask our accountants for permission to buy something and take their advice in isolation, but this can be misleading. Accountants often particularly discourage young dentists from taking on more debt. While this advice isn’t outright wrong, it’s only one part of the picture. Here’s what else you need to know.
Heath Brantley, DDS
Feb 1st, 2019

I Have It, You Want It