I have been considering incorporating placement of small-diameter implants into my practice ... 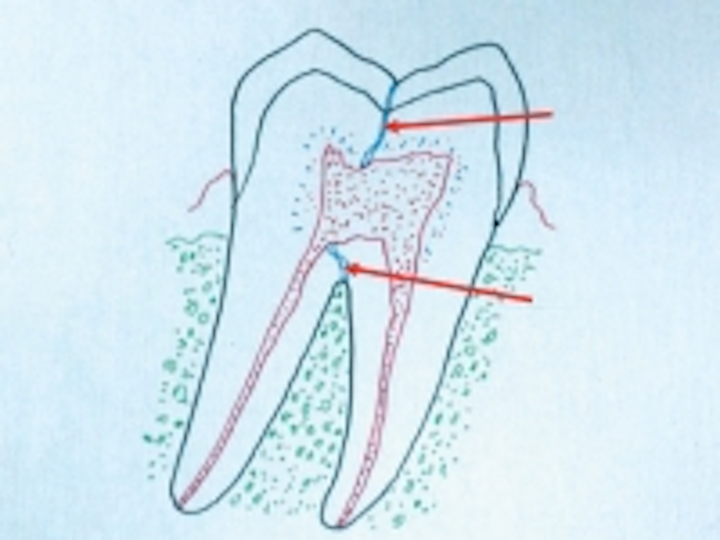 A From the time they were introduced, small-diameter implants (SDIs) have been criticized by some dentists and loved by others. The mini-size implant is usually considered to be up to 2.9 mm in diameter with a typical length of 13 mm (Fig. 1). I am frustrated about why this size of implant has been controversial, and I have some answers for you.

Initially, SDIs were used for transitional support of prostheses, while conventional-diameter implants (3 mm and more in diameter) integrated into bone (Fig. 2). There was no intent to have the SDIs serve for more than the transitional period, and they were taken out as soon as it was considered that the conventional diameter implants had integrated solidly in place.

Initially, SDIs did not have the special sandblasted or etched surfaces that are now known to enhance bone integration and provide long-term service. Similar nonsurface-treated SDIs are currently used in orthodontics as anchors to assist in tooth movement.

In the mid-’90s, some dentists began successfully using SDIs for support of complete dentures (Figs. 3 and 4). Pure titanium, the initial composition of SDIs, was soon replaced with titanium alloy, which has greater strength. Etched and/or blasted surfaces began to be placed on the external of the titanium alloy SDIs. The external surfaces on the SDIs were then comparable to conventional-diameter implants.

Imtec, a then-small company in Oklahoma, popularized the use of SDIs during the early and mid-2000s. Imtec is now owned by 3M ESPE and is still the most popular and research-supported brand of SDIs.

SDIs were met with both enthusiasm and ridicule. Those practitioners who took the time to learn to use SDIs found repeated success for numerous indications, but some dentists considered them only transitional in nature, and this impeded the growth and acceptance of SDIs.

It is now over 14 years since the FDA cleared SDIs for “long-term use” (1997). Since then, they have grown in popularity and acceptance. However, with that growth came some improper use of SDIs, and lack of knowledge on the part of some practitioners who started using them without adequate instruction. Undoubtedly, it is primarily those practitioners who have caused the criticism from certain segments of the profession.

What are the major indications for SDIs? It is well known among those who place implants that the majority of patients who have missing teeth, especially edentulous patients, do not have adequate bone in a facial-lingual dimension to allow placement of conventional-diameter implants without grafting (about 6 mm of bone facial-lingual is required for conventional-diameter implant placement). Additionally, many patients who have inadequate bone do not want grafting, are too debilitated to have the traumatic surgery required for the grafting, or do not have the financial resources for extensive grafting. The obvious solution for those patients is to use SDIs, which can be placed in a minimum of 3 mm or 4 mm of bone in a facial-lingual dimension.

Correctly designed SDIs are gently tapered and screw-shaped with a point on their apical end (Fig. 1), in comparison to conventional-diameter implants, which usually have a blunt end. SDIs spread bone when they are placed, while conventional-diameter implants usually require significant bone removal to allow their placement. Some so-called, but incorrectly designed, SDIs have a point but their taper is far too severe, causing bone fracture, unless significant bone is removed before placement. Inadequate design of some SDI brands is one of the reasons for potential failure.

1) Fully edentulous mandible. This is by far the most significant indication. The bone in this indication is usually dense and strong with minimal trabeculation porosity (Type 1 bone). Usually, four SDIs spaced from canine area to canine area are adequate (Fig. 5). Seldom does failure occur in such locations unless the implant is placed improperly (described later).

2) Fully edentulous maxilla. Bone in this area is not as dense or predictable as in the mandible (Type 3 bone). As a result, more SDIs should probably be placed to ensure success by better sharing of the occlusal load. Although I have had success with four SDIs spaced between the canine areas, placement of six is a safer treatment plan.

4) Augmentation of support and retention for fixed-prostheses. Occasionally, there exists a span between potential abutment teeth that is considered to be too long for a conventional fixed-prosthesis, and the remaining facial-lingual bone in the pontic area is too minimal for conventional-diameter implants. Infrequently, placement of SDIs in the pontic area is indicated for additional support and retention of the fixed prosthesis. This is a highly controversial use and is considered to be experimental. The implants and teeth supporting the fixed prosthesis conjointly support the prosthesis, and it is mandatory to cement such prostheses with strong cement, such as resin. Provisional cementation of such prostheses is definitely contraindicated, as natural teeth will intrude as the provisional cement breaks loose.

5) Sole support of a fixed prosthesis. I have done this only a few times. This plan is occasionally indicated in lower anterior partially edentulous areas, where there is minimal bone in a facial-lingual dimension and limited mesial-distal space. When accomplished properly and with adequately supportive bone, there is no reason to be concerned about the potential success of the restoration.

6) Support of a single crown. Although suggested by numerous clinicians and documented by some clinical observational studies, this is the most controversial use of SDIs. There are a few cases in which this use may be indicated, such as for congenitally missing maxillary lateral incisors or for a single missing lower anterior tooth. In such limited cases, I suggest placing the SDI, making a space under a “flipper” to accommodate the SDI abutment, loading the space with soft denture reline material, and allowing a few months of bone integration into the implant before loading it. I know I am conservative, but I prefer success to failure.

Use of SDIs as support and retention for removable complete and partial dentures is safe and predictable when accomplished properly. The other uses described here need additional long-term use and observation for validation, and should be accomplished with caution only when other alternatives are not possible.

To make SDIs successful, I suggest the following:

If small-diameter implants are placed observing and accomplishing these characteristics, they will serve very well. It is my candid opinion that SDIs are one of the most useful concepts that have been developed in many years, and that when placed properly, they can serve millions of patients that cannot be served with conventional-diameter implants.

Our newest DVD, V2551 “Predictable Removable Partial Dentures” shows small-diameter implants used with removable partial dentures. In my opinion, this is one of the most important potential uses for these small implants. The DVD shows every step to using mini implants under removable partial dentures, thus reducing the use of clasps and improving denture support and retention. Please visit our website at www.pccdental.com or call 800-223-6569 for additional information.

Dr. Christensen is a practicing prosthodontist in Provo, Utah. He is the founder and director of Practical Clinical Courses, an international continuing-education organization initiated in 1981 for dental professionals. Dr. Christensen is a cofounder (with his wife, Rella) and senior consultant of CLINICIANS REPORT (formerly Clinical Research Associates), which since 1976 has conducted research in all areas of dentistry.