This month I will address retrofitting existing dentures when placing new implants. Too often, implant placement to improve prosthesis retention in edentulous patients is attempted with suboptimal preexisting dentures. 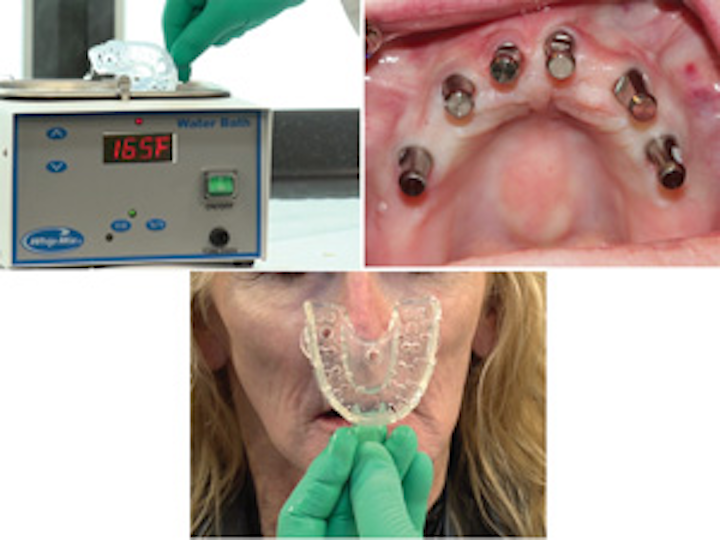 Prior to surgical implant placement

Welcome back! This month I will address retrofitting existing dentures when placing new implants. Too often, implant placement to improve prosthesis retention in edentulous patients is attempted with suboptimal preexisting dentures. In such cases, erroneously attempting to enhance the retention of an ill-fitting prosthesis rather than objectively evaluating its quality prior to placing implants will frequently result in postoperative problems and patient complaints. As an example, let me take you through a case report where an appropriate evaluation revealed that replacement of the prosthesis was indicated prior to the surgical placement of the implants. In this particular case, we will utilize the fabrication of a new prosthesis to identify the appropriate location for implant placement. The patient was an 80-year-old male whose chief complaint was that his maxillary and mandibular dentures were loose, felt too big in his mouth, and food particles migrated under and around his dentures.

Our assessment revealed a lack of buccal corridor space bilaterally, along with underextended retromylohyoid space and a rotational movement of the prosthesis when the patient began to chew. The evaluation further revealed that the mandibular ridge was severely atrophic with a spinous ridge associated with high frena attachments relative to the height of the residual alveolar ridge. However, after CT evaluation, it was noted that there was sufficient space for small diameter implants to be placed.

Treatment plan – Fabricate a new denture to eliminate all of the previous deficiencies prior to implant placement and utilize this new prosthesis as a guide in implant placement positioning. The procedure was begun by making appropriate definitive impressions followed by evaluation of the occlusal vertical dimension utilizing the exhaustive technique to obtain a repeatable resting position, and factoring in closest speaking space. The recording was taken using a gothic arch tracing jaw recorder to register the centric relation position. Especially important was adherence to the "neutral zone principles" to capture functional muscle actions during swallowing, speaking, and mastication, and to determine the mandibular anterior and posterior denture implant positions. This enables the design of any prosthesis in a neutral zone, thereby reducing unwanted movement.

After the fabrication technique, the resulting occlusal scheme for this patient was in reverse occlusion. Engineering the prosthesis prior to implant placement will generally decrease postoperative problems and will act as a guide for proper positioning of implants within a controlled musculature zone. After the prosthesis was completed and delivered, it was tested to ensure that the prosthesis was stable and comfortable to the patient. It was also noted that the patient no longer trapped food under and around the prosthesis, and his initial feeling of the teeth being too big was eliminated. The implant surgical procedure was then begun after the successful prosthesis was delivered.

Many times we get in a hurry and place implants over existing dentures that may or may not be satisfactory. The purpose of this article is to revisit the need for thoroughly evaluating an existing prosthesis prior to considering surgical placement of implants. There is significant literature available today which suggests that patients often are not told that by utilizing their existing prostheses they may still experience problems with food entrapment and a bulky sensation. I believe we can all agree that implants when done properly will satisfy the majority of the problems that patients have had with their existing dentures. We have also seen from many articles that dentures that have not been well evaluated prior to implant placement often will result in complaints.

I hope my pleasure in dentistry will also be yours. Until next month be safe.