The 'three and out' technique: A simple way to achieve complex results

The rule of three is a principle suggesting that things that come in threes are inherently funnier, more satisfying, or more effective than other numbers of things. It is also based on the technique that people tend to remember three things. In oratory it comes up all the time. The Latin phrase, omne trium perfectum ("everything that comes in threes is perfect" or "every set of three is complete") conveys the same idea as the rule of three. 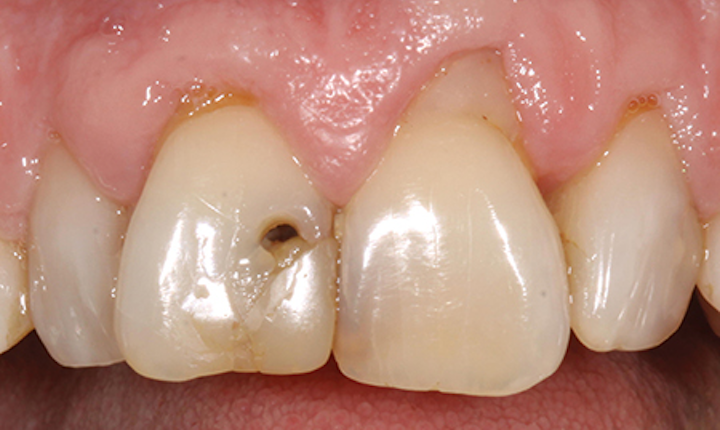 The rule of three is a principle suggesting that things that come in threes are inherently funnier, more satisfying, or more effective than other numbers of things. It is also based on the technique that people tend to remember three things. In oratory it comes up all the time. The Latin phrase, omne trium perfectum ("everything that comes in threes is perfect" or "every set of three is complete") conveys the same idea as the rule of three. When it comes to high-end anterior composites, we often see the "rule of 300s" rather than the rule of three. With this amount of complexity, it makes it difficult for the average dentist not only to become confident with this skill set, but more importantly, to become profitable. Is all of this necessary? In some cases it very well may be, but for the most part, it will become evident shortly that by keeping it simple with just three composites or fewer, one can create beautiful restorations in a very short time.

This patient presented to my office for "replacement" of his existing bonding. As evident in the preoperative photo (Figure 1), gross decay was visible on both teeth Nos. 8 and 9. Following local anesthesia, the patient became extremely claustrophobic after placement of a rubber dam and requested removal of it. Cotton rolls, high- and slow-speed suction, as well as Dri-Angles were placed for adequate isolation. Conventional cavity preparation was completed for a Class II composite on No. 9 and a Class IV composite on No. 8, and all infected carious tooth structure was removed.

As evident in Figure 2, the decay was indeed deep; however, no exposure was noted. The preparation was left visibly moist. TheraCal LC was applied directly to the cavity floor and manipulated into a smooth surface covering all deep dentin areas. It was light cured for 20 seconds. A selective-etch technique was chosen. The enamel was etched using Select HV Etch, a 35% high-viscosity phosphoric acid etchant containing benzalkonium chloride (BAC) for 15 seconds.

The etchant was rinsed thoroughly and excess water was removed by blotting the surface with an absorbent pellet, leaving the preparation visibly moist. Two drops of All-Bond Universal (Bisco) were dispensed into a clean well, replacing the cap onto the bottle promptly to avoid evaporation of solvent. Two separate coats of All-Bond Universal were applied, scrubbing the preparation with a microbrush for 10 to 15 seconds per coat. The excess solvent was evaporated thoroughly by air-drying with an air syringe for at least 10 seconds and until there was no visible movement of the adhesive. The adhesive was light cured for 10 seconds. A thin layer of tetric flow composite was placed over the TheraCal and light cured for 10 seconds. 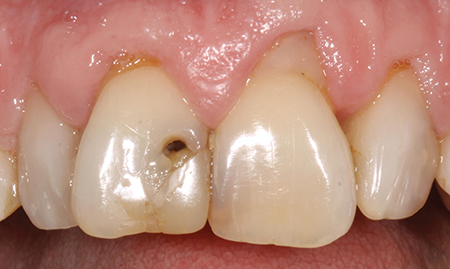 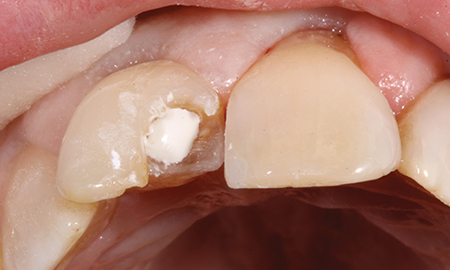 The composite chosen for this restoration was Empress Direct (Ivoclar Vivadent), shades A2 enamel and A2 dentin. A thin layer of A2 enamel was placed for the lingual wall and light cured for 10 seconds (Figure 3), followed by A2 dentin to build up the body of the tooth. Prior to the final outer layer of A2 enamel being placed, orange characterization tint (Bisco) was placed in the middle incisal third in order to mimic the orange hue evident in tooth No. 9. Following light curing of this tint, the final layer of A2 enamel resin was placed and light cured for 10 seconds. Tooth No. 9 was restored with tetric ceram resin, shade A2. The restoration on No. 8 was shaped with a red stripe flame diamond bur and flexi-discs, occlusion was adjusted, and finishing and polishing completed (Figure 4). 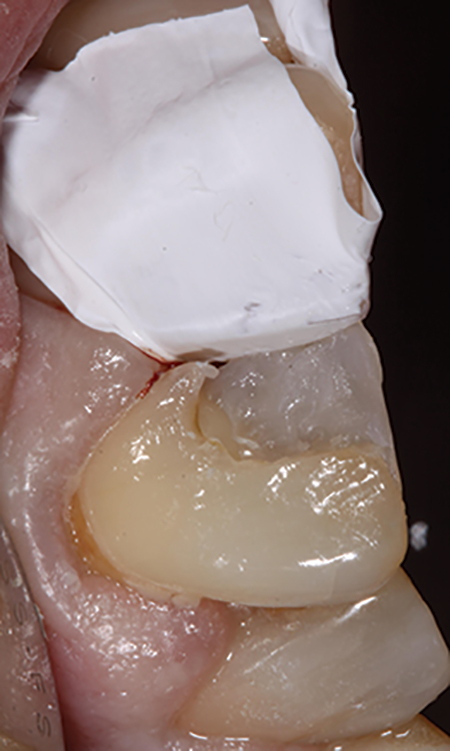 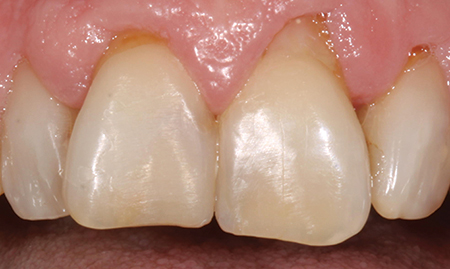 To more clearly demonstrate the simplicity of this technique, the incisal half of a denture tooth is restored in resin to show how easy it is to mimic the natural anatomy of a tooth with minimal effort. The incisal half of the denture tooth was sectioned, after a putty matrix of the lingual anatomy was made (Figure 5). The first layer of resin placed as a lingual wall was Empress Direct Enamel Shade A3 (Ivoclar Vivadent) (Figure 6). Following the lingual layer, the dentin is re-created incorporating the three lobes evident in the adjacent central incisor, utilizing Empress DirectShade A3 dentin (Ivoclar Vivadent) (Figure 7). To re-create the visible incisal translucency, Empress Direct Trans-Opal shade (Ivoclar Vivadent) was placed at the incisal edge and in between the dentin lobes (Figure 8). The final layer was the same material as the initial lingual wall, Empress Direct A3 Enamel (Ivoclar Vivadent) (Figure 9). After shaping, finishing, and polishing, it is clear in this polarized view that the complex anatomy present in tooth No. 8 can without question be re-created with this simple three-step method (Figure 10). 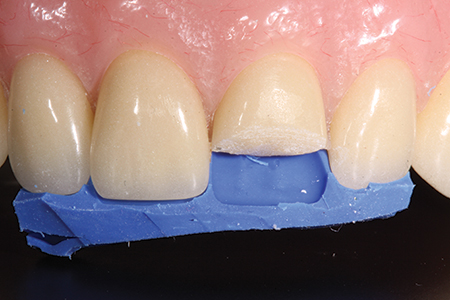 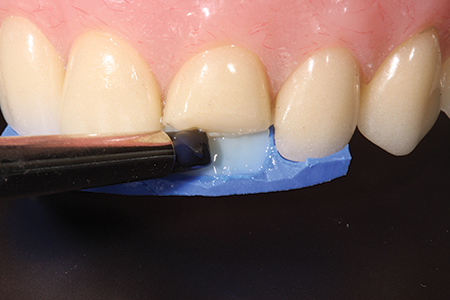 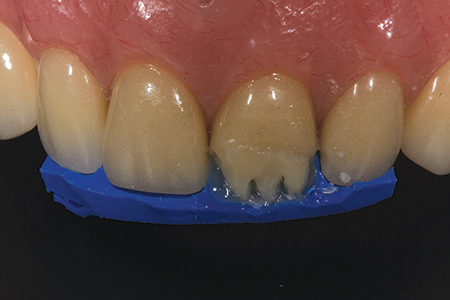 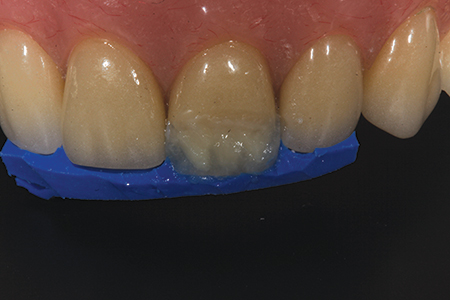 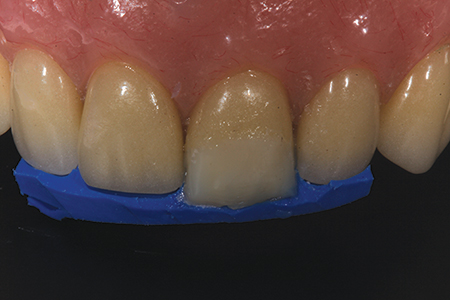 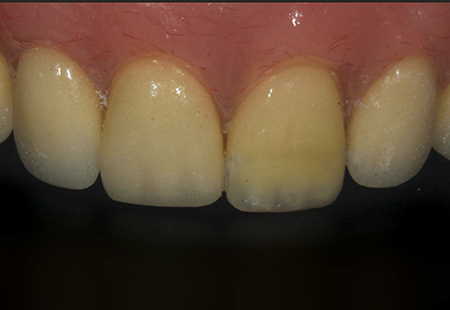 In any extreme situation, you cannot survive for more than: three minutes without air, three days without water, or three weeks without food. You can, however, survive with just three composites. As you can see from Figures 11 and 12, a case that utilized one composite, one characterization tint, and took less than 30 minutes, achieving world-class results does not always require unlimited materials and techniques. We, as practitioners, can be very productive without sacrificing quality and ultimately give every patient exactly what they deserve-the best esthetic restoration possible. Putting it simply, if you want your resin to be remembered, use this simple rule of three. 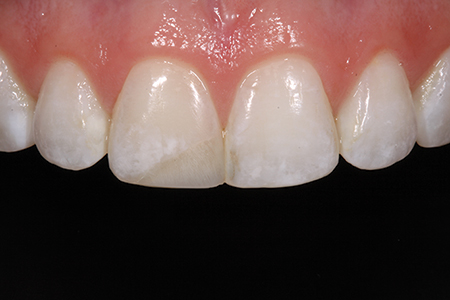 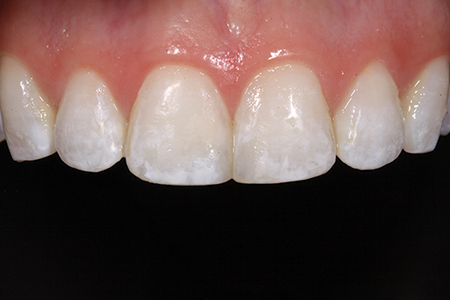