Making the case for ‘herodontics’: Tips for case selection and management of the tooth with a guarded prognosis

Dentistry is in the midst of being disrupted by DSOs, DIY orthodontics, and more. Here’s how your dental practice can meet shifting patient demands. 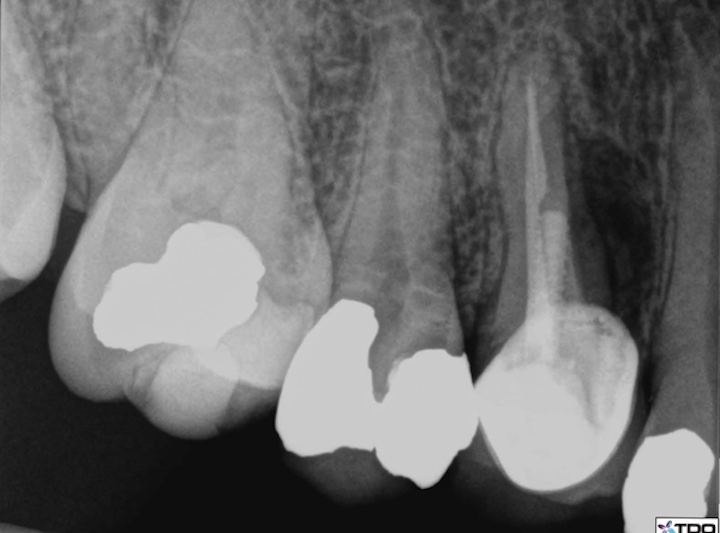 Most practicing dentists can relate to the following scenario. A patient presents with an infected tooth and failing prior root canal therapy. After a thorough exam and diagnosis, it is clear that any treatment plan to attempt saving the tooth will have a questionable prognosis. The patient wants to exhaust all tooth-saving options before extraction, and the dentist is conflicted. The case presented here will illustrate key points in the decision-making process that will lead to a successful outcome.

A healthy 40-year-old female presented with a draining sinus tract on the buccal mucosa adjacent to tooth No. 5. She reported persistent drainage over the past month and a previous root canal therapy, post, and crown many years ago.

A clinical exam confirmed the presence of a draining sinus tract. Periodontal
probing depths were within normal limits, and the restoration was intact. The radiograph showed previous root canal therapy, post, and crown. A radiographic exam revealed a radiolucent area on the mesial aspect of tooth No. 5 in the coronal third adjacent to the post, as well as a periradicular radiolucency (figure 1). 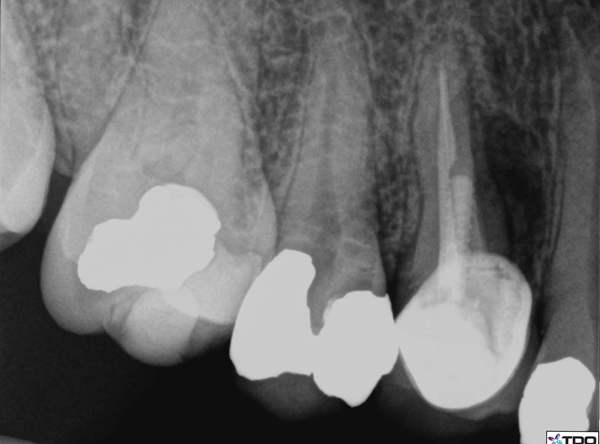 Figure 1: Radiolucent area on mesial aspect of tooth No. 5 in coronal third adjacent to post, as well as a periradicular radiolucency

Based on the location of the lesion and the adjacent post, a post perforation or root fracture was suspected. A diagnosis of previous root canal therapy with chronic periradicular abscess was made. The following treatment options were presented to the patient:

1. Extraction and tooth replacement with a fixed bridge or dental implant.

2. Root canal re-treatment, including post removal and internal repair of the suspected post perforation. If a fracture were confirmed during treatment, the only option would be extraction.

In this case, the patient was highly motivated to save her tooth and was aware of the guarded prognosis. The potential need for extraction was discussed, and informed consent was obtained. The proposed treatment plan was post removal, re-treatment, and internal repair. If a fracture were located at the time of treatment, extraction and socket preservation would be performed. 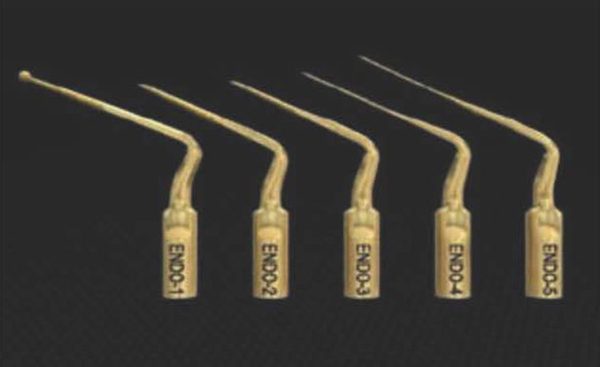 After local anesthesia was given, an occlusal access was made through the crown. Throughout the procedure, an endodontic operating microscope (Global Surgical) was utilized. The post was isolated, and the core material around the post was removed. The post was successfully removed using a combination of ultrasonic instruments (Dentsply Sirona; figure 2) and the Ruddle Post Removal Kit (Kerr; figure 3). 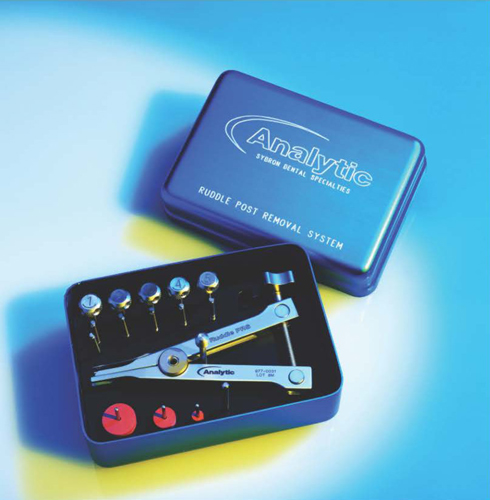 The access cavity and canal walls were examined for fracture or perforation. While a fracture was not observed, a perforation was visualized at the apical extent of the post preparation in the lingual canal. Conventional re-treatment of both the buccal and lingual canals was completed. Careful attention to the irrigation protocol was made in order to prevent extrusion of irrigating solutions outside of the perforated root. The buccal canal was obturated to the canal orifice, and the lingual canal was packed apical to the perforation. 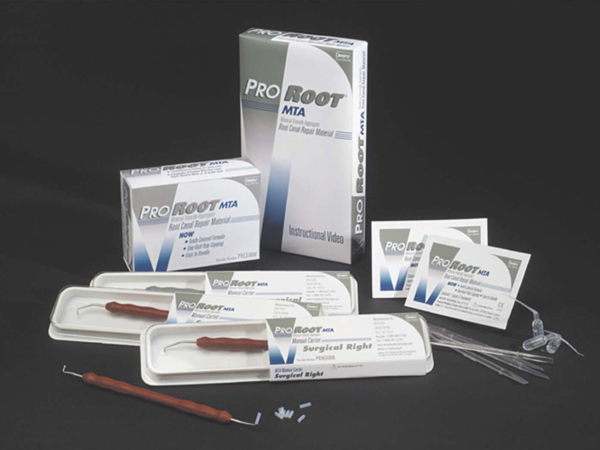 Figure 4: MTA used to fill the perforation and coronal third of the lingual canal

A small piece of absorbable collagen material (OraTape, Salvin Dental) was packed into the perforation until a matrix was formed that would keep the repair material confined to the root. The perforation and coronal third of the lingual canal were filled with mineral trioxide aggregate (ProRoot MTA, Dentsply Sirona; figure 4). The occlusal access was sealed with cotton and Cavit temporary filling material (3M Oral Care). The final treatment radiograph shows re-treatment and repair (figure 5). 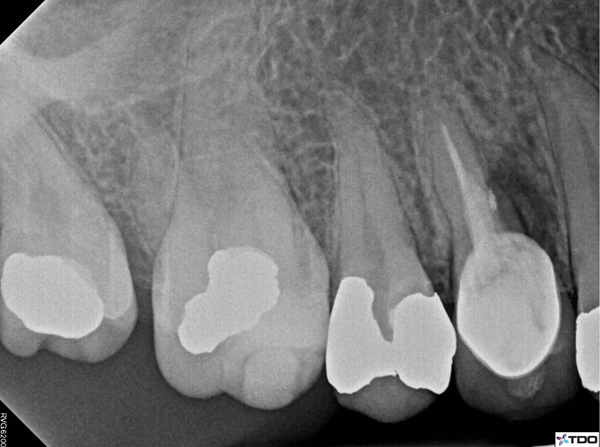 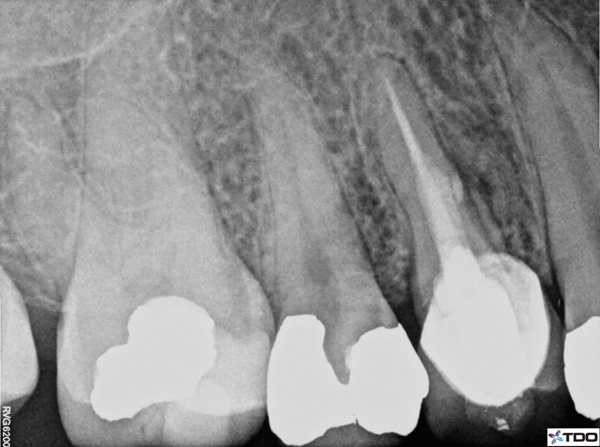 This case presents a difficult situation for the dentist. While the outcome remains successful, the other options for treatment would also have been reasonable. The most significant factor in including the option for re-treatment and repair was the absence of a narrow periodontal pocket. This is a significant differentiating factor in making a diagnosis of a perforation versus a fracture. The radiograph often looks the same in both instances, but in the case of a vertical fracture, the narrow pocket is somewhat diagnostic. The implication is that a perforation can be considered a closed lesion without communication to the sulcus. The use of MTA to repair the perforation was based on its ability to promote cementum repair and predictable sealing capabilities.1,2 Certainly, a large perforation may also have caused a communicating periodontal defect, and this would have created a hopeless prognosis much like a fracture.

In addition, saving the crown was a significant factor in the treatment planning process. If the crown had been ill-fitting or had fractured during the procedure, the case for extraction would have been stronger. There may also have been financial considerations, and tooth replacement with an implant-
supported crown would have been a predictable option. Some patients would not be willing to pursue such a perceived heroic measure to save the tooth. The patient treated in this case was highly motivated to save her tooth and was aware of its guarded prognosis. This case demonstrates the possibilities for saving teeth with the correct diagnosis, plan, and treatment.

Michael Zuroff, DDS, DABE, is a graduate of the University of Detroit School of Dentistry. He completed one year of general practice residency at Sinai Hospital in Detroit and attended New York University for his postgraduate training in endodontics. He is a graduate and fellow at the Misch International Implant Institute and a diplomate of the American Board of Endodontics. Dr. Zuroff has a special interest in bone grafting and implant surgery, and he lectures extensively on endodontics and implants.