It may be considered ubiquitous in dentistry, but in reality, many providers steer clear of nitrous oxide. Here’s a quick refresher course on the place of N20 delivery in dentistry. 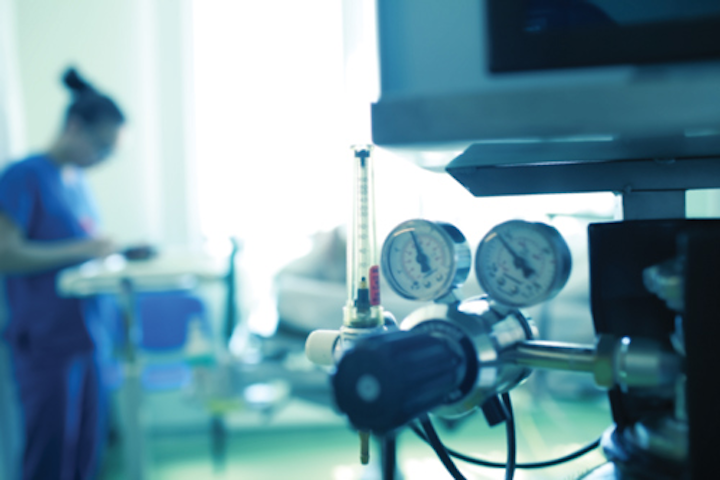 I still remember THAT day of dental school. In the midst of our class on anxiety and pain control, our didactic course turned into an experiment on our fellow classmates. Unlike the injection workshop, affectionately known as “stab lab,” I looked forward to this one. I placed the nasal mask over my nose and proceeded to take a few deep breaths. My friend continued to raise the concentration . . . 25%, 40%, 50% . . . and then 60%. There it was: euphoria and weightlessness. Sadly, after a minute, the nitrous oxide was turned off. The oxygen was turned to 100%, ending that rare moment of bliss found within the chaos of dental school.

That day, I thought that nitrous oxide was amazing. But it turned out it wasn’t for everyone. On the other side of the classroom were two of my classmates. Let’s just say one of my classmates didn’t experience the same feeling I did. Instead of euphoric bliss, she experienced feelings of uneasiness followed by sweating and feelings of losing control. Instead of sinking into the chair, she tried to jump out of it. Feeling like she was in a sauna, she shed extra layers of clothes. For her, “laughing gas” wasn’t a laughing matter.

Nitrous oxide may be considered ubiquitous in dentistry, but in reality, many providers avoid this potentially valuable service for patients. To help all of us understand this powerful tool better, I’ve prepared a quick refresher course on nitrous oxide delivery. 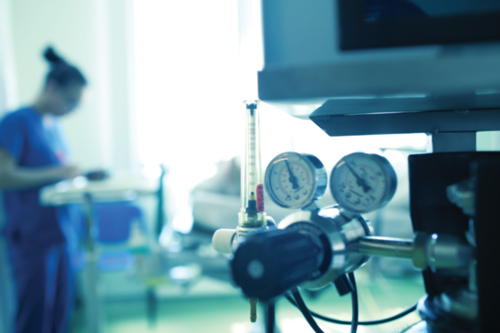 Nitrous oxide (N2O) is the most common inhalation anesthetic used in dentistry, with its first use dating back to Horace Wells in 1844.1 For decades, it has been used regularly by dentists as an effective anxiolytic and mild analgesic. It is a nonpotent, inhalational anesthetic that is colorless, odorless, and nonirritating to the tissue. While it is affectionately known as laughing gas, it is not suitable for all patients. Care should be taken when administering N2O in the dental setting. A detailed history and physical should be reviewed to prevent adverse events.

N2O has a rapid onset of action due to its low blood-gas solubility. It is transported in the blood as a free gas, not combining with hemoglobin in the blood. It does not undergo biotransformation in the body and is eliminated by expiration.

Minimum alveolar concentration (MAC) is defined as the percentage of an anesthetic gas that is needed to prevent a response from a surgical stimulus in 50% of patients. N2O has a MAC of 104% and therefore a low potency. Its use at sub-MAC doses is effective for anxiolysis and mild analgesia. While every patient responds differently to N2O, factors that increase MAC (i.e., decrease effectiveness) include fever, CNS stimulants (e.g., cocaine), decreasing age, and chronic alcoholism.2 Factors that decrease MAC (i.e., increase effectiveness) include acute CNS depressants (e.g., alcohol), increasing age, severe hypercapnia, severe hypoxemia, and anemia.2 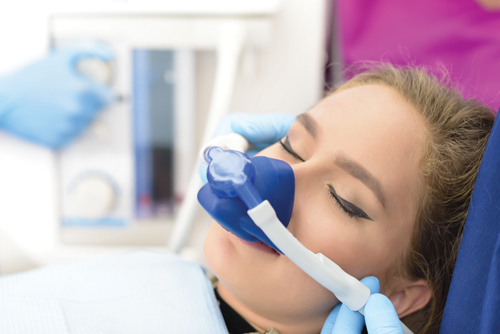 N2O has minimal cardiovascular and respiratory effects—unless combined with opioids or other sedatives. There is increased respiratory response due to sympathetic stimulation, which can be offset by opioid use. Concentrations below 50% MAC have minimal effect on hypercapnic response (i.e., response to carbon dioxide). However, concentrations as little as 10% MAC produce a 50%–70% decrease in ventilatory hypoxemic response (i.e., response to oxygen).2 This may interfere with the ability of patients with COPD to breathe, since they heavily rely on their hypoxemic response for ventilation.

N2O is commonly used for anxious or fearful patients, especially pediatric populations. It may be used to alleviate fear or pain of an injection. In a small study, N2O allowed patients with a hypersensitive gag reflex to tolerate placement and holding of a digital sensor as well.3

Patients with conditions involving enclosed cavities may experience significant problems. These conditions include COPD, cystic fibrosis, pneumothorax, intraocular air bubbles, middle ear effusion, air embolism, and bowel obstruction.1 This is due to the fact that N2O diffuses into air spaces quicker than nitrogen can enter the bloodstream, therefore increasing the pressure in those enclosed spaces. Pregnant patients, especially those in the first trimester, should not receive N2O because it has been associated with infertility. Furthermore, patients unable to breathe through the nose (i.e., nasal obstruction) or those unable to sit with a nasal mask are not suitable candidates for N2O.

Side effects and toxicity

Although rare, side effects may include postoperative nausea and vomiting (PONV), dizziness, headache, tingling, euphoria, and diffusion hypoxia.2 Risk for these effects increases as concentration and duration of N2O is increased. Preoperative fasting is an independent risk factor for PONV; therefore, having patients drink or eat something light two hours before administration may be advantageous.4

Caution should be used when titrating N2O to avoid deep sedation, which may lead to other serious adverse reactions such as laryngospasm, desaturation, and apnea.4

Long-term administration/exposure to N2O can lead to inactivation of vitamin B12, which can cause hematological irregularities (e.g., increased homocysteine levels, megaloblastic anemia), bone marrow suppression, central nervous system toxicity, optic nerve injury, thrombosis, and infertility.5 Initial symptoms may include paresthesia or numbness in the limbs that advances to the trunk. Treatment includes injections or supplements of vitamin B12.4 While these levels of toxicity are uncommon, precautions such as an adequate scavenging system, well-ventilated rooms, and administering 100% oxygen for 3–5 minutes at the end of the case should be performed.5

N2O is most commonly stored under 750 psi as a vapor overlying a liquid in a blue color-coded tank. The standard E cylinder for N2O contains 1,600 L of nitrous gas. Unlike oxygen (O2), the pressure gauge will read at 750 psi until 25% of the gas is left (400 L of N2O) in the cylinder. The only reliable way to determine the amount of N2O left in the tank before the 25% threshold is reached is by weighing the cylinder and comparing it to its full weight.

According to the National Institute for Occupational Safety and Health, N2O exposure should be limited to 25 ppm in order to minimize any potential effects from long-term exposure.6 N2O should always be administered with a scavenging system and a tight nose seal in place in order to reduce environmental exposure. According to one study, delivering N2O in an open clinic also reduced levels in the environment.6 Recent studies indicate that N2O may be administered via a nasal high-flow system,7 which may improve patient comfort, although there is no data about potentially increased risk of environmental exposure.

N2O delivery systems are usually equipped with a fail-safe feature, which prevents N2O delivery without O2, and a flow-safe feature, which prevents less than 30% O2 delivery.5 The concentration of N2O delivered is typically between 30% and 70%. However, the concentration reaching the alveoli is often reduced. This is due to various factors, including equipment leakage, mouth breathing, poorly fitting masks, and physiological dead space.2

N2O concentration should be increased by 10%–25% every 1–2 minutes to avoid oversedation or potential adverse events. An easy way to deliver N2O is by starting with 6 L/min O2, adding 1 L/min of N2O, and reducing 1 L/min of O2 every 1–2 minutes until the optimal effect is reached. Maintain this concentration of N2O, reminding the patient to breathe through the nose so that the N2O continues to achieve maximum effect.

It is critical to continuously monitor patients’ respiration and consciousness to prevent oversedation and other unwanted effects. In order to avoid possible diffusion hypoxia and reduce unnecessary N2O exposure to the operatory, administer 100% O2 for 3–5 minutes at the end of the case. Ensure that the patient returns to preoperative levels of function and cognition before discharge.

Recent studies suggest that patients may develop a tolerance to N2O after multiple exposures,8 leading to less analgesia and anxiolysis with the same concentration of N2O. It may be prudent to ensure that the patient is adequately sedated before starting any dental work for the anxious patient.

With a long history of safety and efficacy, nitrous oxide can be an incredible service to alleviate the pain and anxiety of our patients. But even with its long track record, adverse effects are still possible. Therefore, a proper preoperative assessment is crucial. Regardless of the procedure, always remember, it our responsibility as doctors to ensure that we are keeping our patients’ best interest and safety in mind. 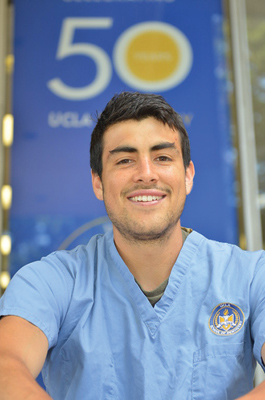 Kristopher Mendoza, DDS, received his dental anesthesiology degree from the University of California, Los Angeles, in 2018. Prior to residency, Kris graduated from the UCLA School of Dentistry. He served as the national president of the American Student Dental Association from 2014 to 2015. He practices at CarePoint Anesthesia Group in Colorado.