Dr. Richard H. Nagelberg examines recent studies on the use of SRP plus LAA on all-cause and disease-specific health-care costs for periodontitis treatment/management in patients with vascular diseases and conditions. 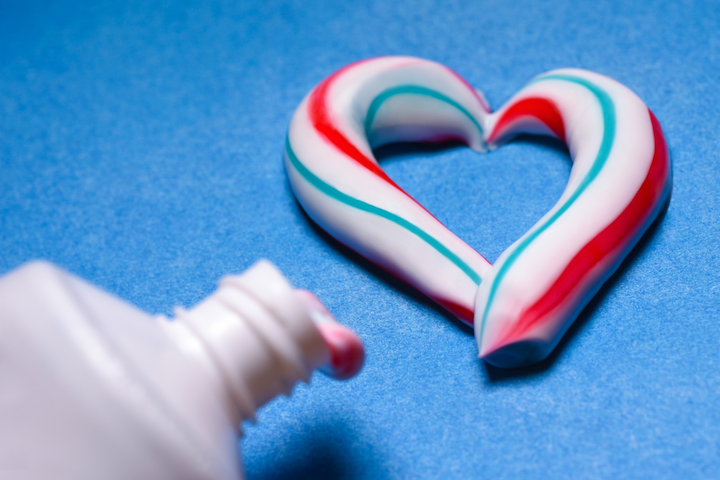 Periodontitis, a disease of the gums and bonE, occurs when bacterial biofilm accumulates on the teeth and gums. The disease is initiated when bacteria accumulates supragingivally. If the biofilm is not adequately disrupted by the patient on a daily basis or by the clinician during a dental office visit, it then migrates apically between the tooth and gums and forms a periodontal pocket. The bacteria also migrate into the interior of the gingival epithelial cells, where they can replicate, migrate between cells, and reach the subjacent connective tissue.

The inflammatory response is activated in response to the bacterial infection. Left untreated, a chronic inflammatory response is mounted, accompanied by the release of additional inflammatory mediators including collagenase, which results in destruction of the periodontium. Destruction of the connective tissue underlying the gingival epithelium results in ulceration of the epithelium. Bacteria in the periodontal pocket pass through the ulcerations and gain entry to the capillaries in the connective tissue, and then they travel wherever the blood flows. Bacteria in the blood can lead to effects at distant sites from the oral cavity. The inflammatory mediators of oral origin can also contribute to the total systemic inflammatory burden, which is associated with an elevated risk for atherosclerosis and cardiovascular disease, among others.

According to recent findings from the Centers for Disease Control and Prevention (CDC), almost 47% (or 64.7 million) Americans aged 30 years and older had periodontitis during 2009 to 2010. Prevalence estimates increase to 70.1% in adults aged 65 and above. Periodontitis is more commonly found in men (56.4%) than women (38.4%). Further, prevalence estimates vary based on disease severity. According to the CDC and the American Academy of Periodontology, prevalence of moderate and severe periodontitis among US adults is estimated to be 30% and 8.5% respectively. It is important to note that periodontal disease is a systemic disease with site-specific involvement. Many patients can have periodontal disease involvement without symptoms.

Mounting evidence suggests a relationship between periodontitis and systemic diseases. Periodontal infection is considered a separate contributing factor for cerebrovascular diseases, cardiovascular disease, peripheral artery disease, respiratory diseases, and complication of pregnancy, including preterm delivery and low-birth-weight babies. It has also been described as a potential risk for increased morbidity and mortality for diabetes, rheumatoid arthritis, obesity, and osteoporosis. The possible mechanisms of linking oral infections to secondary systemic effects are principally the promotion of heightened and chronic inflammation, as well as the intermittent and metastatic spread of infection from the oral cavity to various end organs. The injury from the systemic spread of oral pathogens is compounded by the local release of oral microbial toxins, called virulence factors, that potentially worsen the level of tissue destruction due to chronic inflammation.

A recent study1 sought to understand the direct health-care resource utilization and costs of using scaling and root planing (SRP) and locally administered antibiotics (LAA) for periodontitis on the management of vascular diseases and conditions (VDC) using real-world data. Primary outcomes that were evaluated included total direct health-care resource utilization and direct costs. Health-care resource utilization was identified through the presence of unique medical encounters with the respective setting of care throughout the study period. Specific evaluations included the use of inpatient, outpatient, emergency room (ER), and pharmacy services. Direct health-care costs represented the total payments based on the amounts of adjudicated claims, including insurer and health-plan payments, as well as patient cost sharing in the form of copayments, deductibles, and coinsurance.

This report compares the direct health-care resource utilization and costs among US patients with VDC pre- and posttreatment using SRP plus LAA. Using research databases retrospective analysis of insurance claims from 2012 to 2016 was conducted to identify patients with existing VDC who received SRP plus LAA. Direct health-care resource utilization and costs were measured for the year prior to and two years following treatment.

Health-care costs included total all-cause (costs for medical and pharmacy services) and disease-specific (costs associated with VDC-related encounters based on claims due to principal diagnosis) payments. A total of 505 individuals met the criteria for analysis: 63.56% were males and 80% with an age ≥ 55 years.

Among this commercially insured US population with existing VDC, patients who were treated with SRP plus LAA for periodontitis from 2013 to 2014 demonstrated significant reductions in direct health-care resource utilization and costs during the two-year follow-up period. Total all-cause and disease-specific health-care costs per patient per year reduced by $2,650 (P = 0.05) and $3,775 (P = 0.0096), respectively. See Table 1. This is the first real-world study of its kind. Use of SRP plus LAA for periodontitis may help significantly reduce the overall health-care burden. 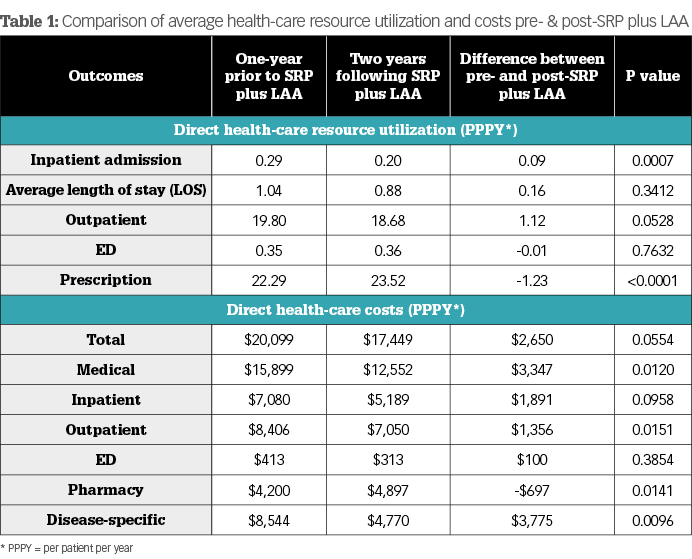 Similar studies have been conducted, examining effects of periodontal therapy on medical costs and hospitalizations among individuals diagnosed with a variety of medical conditions. These studies show a positive impact of periodontal interventions in patients with existing chronic health conditions.2,3 The current study significantly contributes to the growing body of literature investigating health-care resource utilization and medical costs among VDC patients receiving SRP plus LAA for periodontitis.

The study has a number of limitations. Results cannot be generalized to all populations, as patients with limited access to health care or who are uninsured are less likely to be considered. More research is needed to compare clinical and economic outcomes among VDC patients receiving SRP plus LAA to those receiving other periodontal interventions or none at all. This study concludes that the use of SRP plus LAA can lower total all-cause and disease-specific health-care costs for the treatment and management of periodontitis in VDC patients in dental clinics/offices. 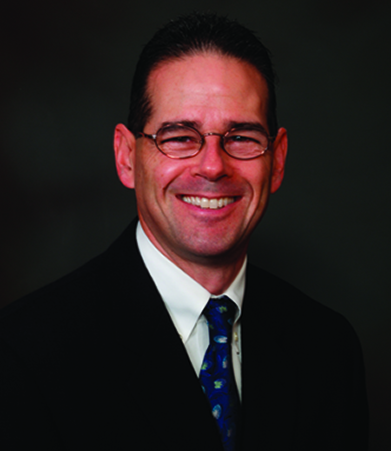 Richard H. Nagelberg, DDS, has practiced general dentistry in suburban Philadelphia for more than 30 years. He is a speaker, advisory board member, consultant, and key opinion leader for several dental companies and organizations. He lectures on topics centered on understanding the impact dental professionals have beyond the oral cavity. Contact Dr. Nagelberg at rnagelberg@orapharma.com.