At first, Dr. Kevin Winters thought one of his friends in rural Claremore, Okla. 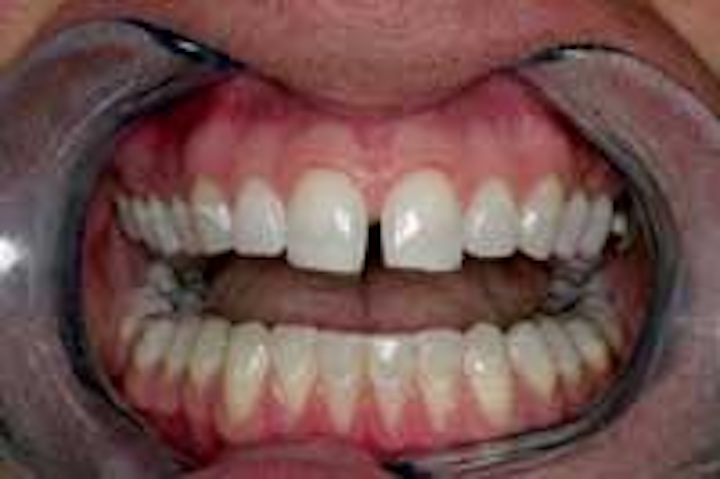 At first, Dr. Kevin Winters thought one of his friends in rural Claremore, Okla., was playing a joke on him. What were the chances that such a strange e-mail to his office could be real?

The e-mail’s author said he was a special operatives agent for the U.S. government who would be leaving Iraq to fly into Tulsa, Okla., for only 24 hours - all for cosmetic dental work. The 30-year-old we’ll call “David” vaguely explained how his front teeth became acquainted with some Iraqi concrete during an ambush that left chips in a pre-existing gap. Dr. Winters replied to David’s e-mail with a request for photos of the damage. Sure enough, the resulting photos supported the mystery man’s claim.

Dr. Winters blocked off an afternoon to give David six composite veneers that would close the diastema and lengthen and widen the laterals. He invited me to watch and ask questions. When David arrived, our questions began. Most important to Dr. Winters was why David chose a dentist 30 minutes outside Tulsa when he was working in Iraq.

“I got referred by a guy in my unit - his uncle had come here before,” David said. “I’m going back to Iraq tomorrow, so I’m just here for the teeth. This is how the government works. When we’ve got flights available, we’ve got to get on them. I saw they had a rotator flight to Tulsa, and I didn’t know when I’d have the time again.”

To get to Claremore, David flew from Iraq to Kuwait, from Kuwait to Germany, and from Germany directly to Tulsa, he said. He rented a car at the airport.

David gave few details about his job description, except that he has worked in Iraq for two years and spent the previous year in Afghanistan.

David is from Maryland originally, but calls Florida home now. He studied psychology at the University of Miami, then spent nine years in the Marine Corps and attained the rank of staff sergeant.

“Now I work for the government,” he said.

Dr. Winters and I weren’t allowed to take David’s photo, exept for closeups of his dental work.

When asked what he misses most about the United States, David said he couldn’t wait to eat a big steak. Usually he eats Middle Eastern cuisine among the Iraqis - he’s not affiliated with a branch of the U.S. military, he said.

Dr. Winters also wanted to know why getting composite veneers was so important to David. “You’re off doing what you’re doing, so why even think about your smile?” Dr. Winters said.

“I had braces for a year when I was 13, and my teeth were perfectly straight,” David said. “I chipped my tooth and was going to get braces again, but I didn’t want to go through that again. I just want a good smile again, and I hear you’re the man.”

Another factor, David said, was that he couldn’t make monthly appointments with an orthodontist while working in Iraq. Composite veneers made the most sense for his situation.

Dr. Winters told David his composite veneers would be good for seven to 10 years. Then David could replace them with permanent porcelain veneers.

“I’ll fly back here to get my porcelains,” David said.

After getting his composite veneers that day, David accepted an invitation for a steak dinner at the home of Dr. Winter’s dental assistant and her family. He returned to Iraq the next day.

Dr. Kevin Winters is one of the original clinical instructors at the Las Vegas Institute. He may be reached in Claremore at (918) 341-4403 or by e-mail at smilmkr95@aol.com.

Are bottlenecks sabotaging productivity in your practice?

Brittany Kinol, DMD, talks about how teledentistry “helps save time, shorten the distance between patient and office, and...allows my team to see these patients in their most familiar surroundings.”
Eden Ivie, BSDH, RDH, PHDHP
Aug 1st, 2019

Tips for spotting workers’ compensation fraud in the dental practice

Unfortunately, some employees try to make fraudulent workers’ compensation claims. There are signs dentists can watch for to see if an employee is trying to make a fraudulent claim.
Samuel V. King
Aug 1st, 2019

Dr. Roy Shelburne found out the hard way what can happen when a dentist and dental practice does not meet all of the proper compliance standards. He shares what he learned so his colleagues do not meet the same fate.
Jul 1st, 2019

Should you take dental insurance? How much of a hit to your profit will you take? Drs. Greg Winteregg and Chris Salierno shed some light on what really happens when you sign on for a reduced-fee plan.
Chris Salierno, DDS
Gregory A. Winteregg, DDS
Jul 26th, 2019
Systems

Know your beneficiaries! 3 scenarios to avoid

How do you want to practice? Developing your practice philosophy

Mustafa Shah-Khan, DDS, shares the story of two new dentists and what their experiences can teach us about developing a dental practice philosophy.
Mar 1st, 2019
Practice

In an open letter to Facebook, Dr. Chris Salierno, chief editor of Dental Economics, says, “I wanted to quit you. Seriously, you got really annoying.” He explains how Facebook changed over the years . . . and how he and his colleagues found a new way to use Facebook that works better for them and their relationships today.
Chris Salierno, DDS
Jan 1st, 2019

It’s important for dentists to understand what’s going on in their practices financially now so that they can plan for their financial future appropriately. That’s where a dental CPA and/or financial planner can help.
Dec 1st, 2018

In the ever-evolving world of digital dentistry, technological changes come fast and furious at patients—often with every other dental visit. But as dentists, we see the entire process unfolding from start to finish—a process that can take months or years. Dr. Gary Kaye says keeping these different perspectives in mind and mastering the introduction of these technological advancements is pivotal to the modern practice.
Gary Kaye, DDS, FAGD
Nov 1st, 2018