How artificial intelligence is shaping dentistry

AI products are already shaping dentistry. Here are some of the forerunners. 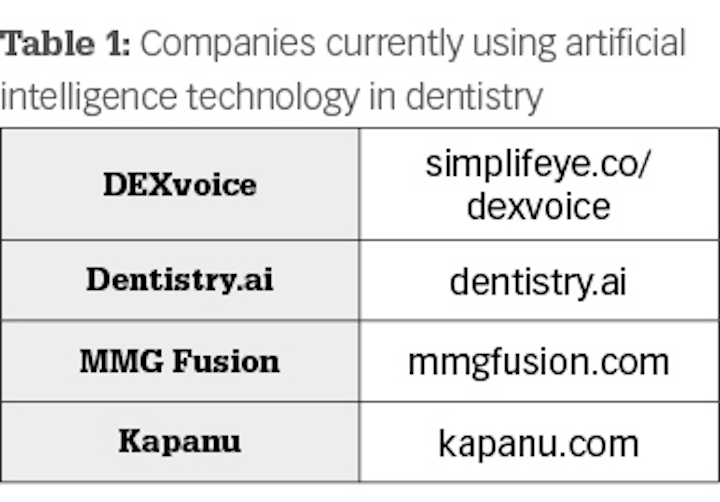 I have always been passionate, maybe even voracious, about keeping up-to-date with the latest in technology. This includes consumer tech and the latest trends in dentistry. On the consumer side, I read up to 17 journals a month to keep up, while on the dental side I created an award process (Cellerant Best of Class Technology Awards) to honor dental companies that truly rule the tech space. After lecturing for many years about maximizing one’s online presence through technology, I jumped at the opportunity to share my passion with Dental Economics’ readers.

In this bimonthly column—Tech in Two Minutes—I will seek to explain and simplify today’s new technologies. I hope this column is something you can look forward to every other month. It will be a quick read on recent advancements, as well as my predictions for their use in dentistry. I have no alternative agenda or subscription to sell—just the opportunity to update you on new tech, present it in real-world terms, and look at its impact on how we practice dentistry.

I want to begin this series with two words that are being bandied about in business, on television, in conversations about software, and likely in all of our homes: artificial intelligence. 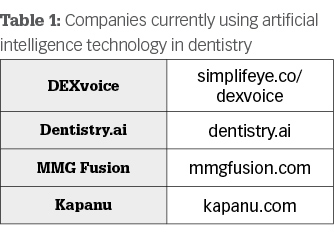 What is artificial intelligence?

When we think about artificial intelligence, or AI, fantastical ideas often pop into our heads. We imagine robots having full conversations with us à la Sophia the Robot.1 But it turns out that AI is more widespread and less mesmerizing than most of us have thought. Sophia is not the sentient being she’s been potrayed as. Instead, she’s a platform that has certain software systems loaded. The software enables her to do things such as read scripts or have basic chatbot-esque conversations. (To see what I mean, check out the video in the references at the end of this article.)

On the other hand, artificial general intelligence (AGI) is probably what we’re all thinking of when we hear AI. AGI is a level of computer intelligence that fully matches human intelligence. AGI isn’t quite developed yet. It doesn’t exist in the way we see it in movies, such as in I, Robot or Westworld. AI, however, is very much present and growing in every industry, from consumer technology to health care.

It should be emphasized that AI is there to use the data we already have to make predictions, act, and learn.

Today, the most prevalent subfields of AI include the following:

• Machine learning—Machines can use neural networks, physics, and statistics to find insights in data without being explicitly programmed to do so.

• Deep learning—This is the learning of complex patterns in large amounts of data. Think image and speech recognition.

• Natural language processing—This is the ability of computers to analyze and generate human speech.

Things such as predictive text, speech-to-text, social media algorithms, and Google search results are all examples of AI.

How is AI currently used in dentistry?

In dentistry, AI is being used for different applications. Let’s take a look at some examples. First, AI is currently being used for voice commands, such as with DEXvoice by Simplifeye and DEXIS. Phrases such as, “Alexa, show me the bitewings of number 19,” will soon be uttered in dental practices around the country, saving dentists a few extra steps and making infection control simpler.

Through machine learning, MMG Fusion’s ChairFill retrieves data from a dentist’s records and analyzes it. ChairFill can find the most profitable dentistry not yet provided, communicate with patients directly, and even book patient appointments. It does all of this without human involvement.

Because computers are able to process large amounts of data and recognize patterns within that data to accomplish tasks, scientists are already using AI in caries detection. One company utilizing AI in this way is Dentistry.ai. Its algorithm is designed to take a large data set of radiographs and recognize patterns within that data. As a result, it helps practitioners more accurately identify carious lesions.

Related to AI, we are also seeing augmented reality (AR) in dentistry. Kapanu, a company recently acquired by Ivoclar Vivadent, has developed proprietary software to visualize the possibilities for your patients’ smiles in real time.

When will AI reach a tipping point for adoption?

The founders of Dentistry.ai, Angam Parashar and Ankit Singh, believe that there will be a significant movement in the dental industry to adopt AI within the next year. Within the next decade, they predict that AI will be “tightly woven” into the fabric of how dentistry is done, much the way that practice management systems are today.2

Interestingly, AR is most commonly used with implant procedures. However, this could change. According to a 2018 study published in Acta Odontologica Scandinavica titled Augmented Reality in Dentistry: A Current Perspective, AR will soon expand into “new applications of restorative dentistry, orthodontics, and endodontics.”3

Personally, I agree with the founders of Dentistry.ai in that change is coming. I believe the tipping point for universal adoption in dental practices will be reached within the next few years, ultimately achieving a presence in offices similar to digital radiographs.

The dental industry will be keeping its eyes on technology that enables AI. This includes the following:

• The Internet of Things (IoT), which collects data from connected devices; examples include the Roomba and smart fridges

• Advanced algorithms, which could one day predict rare events

• Application processing interfaces (API), which is code that enables the adding of AI functionality to existing products

The primary limitations to AI are insufficient data and inaccurate data. This means that clinicians today should focus on collecting the data now to be able to fully use it in the future. If we can do that, we can continue to provide greater care to our patients, Sophia or no.