THE FUTURE OF DENTISTRY

Trends in enrollment, manpower, economics, and practices give us clues. 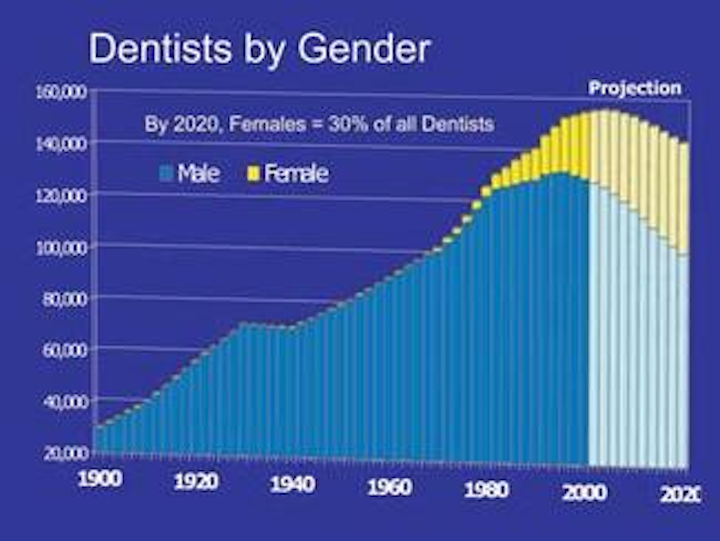 The first article in this series explored trends in dental education. We identified the major shifts in dental school enrollments that were influenced by both demographic and economic factors. Some of the important findings included the recent surge in dental hygiene graduates and the relatively stable level of dental school graduates. Also of great interest is the prospect of having more dentists retiring than there are dentists graduating. In this article we will demonstrate the impact of these enrollment trends on dental manpower levels.

This percentage should increase slowly to about 27 percent by 2020. The number of both dental school graduates and specialty graduates has stabilized; therefore, it is unlikely that the proportion of dentists who are specialists will increase beyond the year 2020. A higher proportion of specialists means there are fewer general dentists.

Dr. Eric S. Solomon is executive director for institutional research at the Texas A&M Health Science Center and professor, Public Health Sciences, Baylor College of Dentistry. Prior to joining the Baylor College of Dentistry in 1992, Dr. Solomon served as the assistant executive director for application services and resource studies at the American Dental Education Association. He has published numerous articles and lectured widely on trends in dentistry, dental manpower, and dental education. Solomon may be reached by email at esolomon@bcd.tamhsc.edu.

Matthew Newman says technology is too prevalent to sit on the sidelines without exploring your options. Here are some factors to consider when deciding to incorporate CAD/CAM into your dental practice.
Matthew Newman
Jan 1st, 2020

Dr. Paul Goodman says, 'Be that dentist and key resource you wish you had early in your career (or did have) and pay it forward. It will benefit you too.'
Paul Goodman, DMD (aka, "Dr. Nacho")
Jan 1st, 2020