This article is a case report of the implementation of an instrument management system (IMS) in a private dental practice. 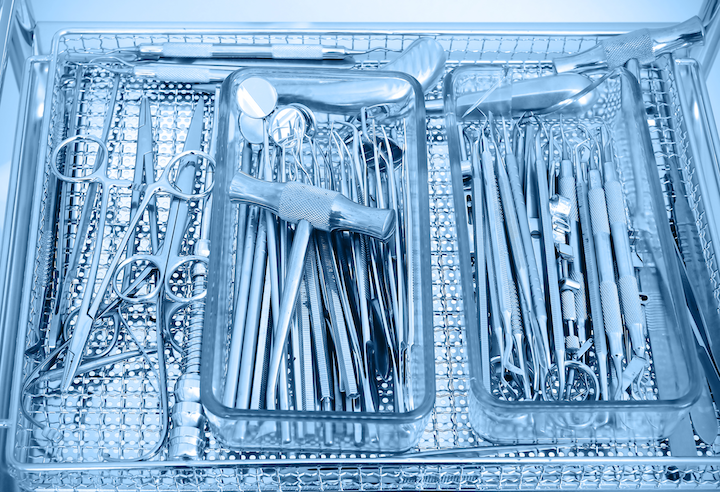 This article is a case report of the implementation of an instrument management system (IMS) in a private dental practice. With the establishment of a new practice, potential instrument processing systems will be evaluated by the dentists and staff.

In a dental practice, organization and efficiency are paramount. Numerous instruments and materials are necessary to complete dental procedures, and there are multiple clinical personnel who handle such supplies routinely during clinical care. If systems are not in place for effective instrument handling and processing, confusion, disorder, and potential frustration are likely.

The implementation of the IMS system often requires preplanning and some adjustments within the instrument processing area. In addition to an initial investment for the cassettes, a larger ultrasonic may be required. Space considerations may include a larger area for wrapping instruments and increased shelving for storage. As a result, the decision to implement cassettes may be controversial.

Despite the initial costs and preplanning requirements, organization, efficiency, and safety during instrument processing and handling are enhanced with cassette usage. Since instruments are self-contained within the cassettes, none should be missing during procedures. Midprocedure retrieval is minimal and operatory preparation is streamlined. Instrument breakage should be eliminated because they are protected within the cassette. Instrument processing with cassettes is safer for members who handle contaminated instruments during all phases of instrument processing, including transportation, cleaning, packaging, and storage.

The dental facility to be discussed was formed by combining three existing dental practices. Drs. "Dale" and "Thomas" were two associate dentists practicing in differing locations who purchased the office of a retiring dentist. The resulting staff of five members was a combination of each of the three practices. When the new staff was formed, the decision to implement dental cassettes was made. The observations, attitudes, and comments of the dentists and personnel were noted and recorded throughout the decision-making process through the first year of the dental practice.

Part 1 of this article will review the introduction and preplanning of the IMS system to this practice, and part 2 (to be published next month) will discuss the implementation process through the first-year follow-up.

Upon initial discussion, Dr. Thomas was entirely in favor of cassette usage for instrument processing. As a practicing dentist for 20 years, he had clinical experience in dental facilities where instruments were processed utilizing pouches and cassettes.

Dr. Thomas previously practiced in a high-volume dental facility with nine operatories and two dentists. In this office, instruments were processed loosely in pouches and were subsequently arranged on trays for various operative procedures. He observed that instruments were often missing during patient care, requiring assistants to leave the operatory to retrieve an instrument. During patient care, other assistants often entered his operatory to search for missing instruments.

Dr. Thomas noted that isolated incidents of instrument retrieval are sometimes inevitable. An explorer may fall on the floor midprocedure, and on rare occasions an instrument tip may break. On these occasions, back-up supplies may be retrieved from an operatory drawer. He also noted that repeated recurrences of retrieval events could lead to awkward interruptions to the smooth flow of dental treatment. Inefficiency of operative procedures will increase the time to perform those procedures. These interruptions may cause distraction and annoyance of the operator and other dental personnel. The patient may also note the lack of organizational systems, which may lead to increased anxiety during dental procedures.

Dr. Thomas noted that repetitive instrument retrieval incidents may quickly become frustrating and problematic. He believed that instrument organization and operatory preparation have the potential to become particularly challenging in high-volume dental practices with numerous staff members and multiple operatories. He firmly believed that organization and efficiency are essential to the smooth operation of the instrument processing system. He believed this would be accomplished by cassette usage and was in favor of the implementation of an IMS in his new practice.

Dr. Dale however, was ambivalent regarding cassette usage. His perception was that both cassettes and pouches were equivalent with regard to productivity, and he stated that he would be satisfied with either method of instrument processing. With an observant clinical staff and keen attention to detail, he believed that streamlined dental procedures could easily be performed with minimal interruptions or instrument retrieval.

He also expressed a cost concern stating that cassettes would require much more of an initial investment than pouches and he suggested a cost analysis of cassette implementation. As a new business owner, he believed that their new dental practice should invest in products and supplies that would ultimately generate a greater cash flow or improve productivity. Thus, he questioned whether the benefits of cassette usage would outweigh the initial costs and preplanning requirements for his new practice.

Initial perceptions of IMS by the newly formed staff

The newly formed staff had preconceived notions regarding cassette usage as well. Two staff members were opposed to the implementation of IMS. They felt that cassette usage would be more time consuming than pouches due to the need to wrap them and tedious opening and closing. They felt that this time spent would detract from patient care. Concerns were also expressed regarding the sound of cassettes with the mention of a previous office where cassettes could be heard "clanging in the sterilization area." These two team members noted that they were in favor of processing loose instruments in pouches for all reasons noted.

Two other staff members were in favor of cassette usage. These team personnel agreed that cassettes were safer than pouches during instrument processing. One recounted an experience during instrument reprocessing utilizing pouches -- a sharp instrument poked through the paper portion of the pouch, causing an injury in her hand. The other assistant noted an explorer once fell out of a wet/perforated pouch and hit her in the ankle. They agreed that they would be less likely to spend time searching for misplaced instruments during operatory preparation or interrupting patient care.

The final staff member inquired, "What's a cassette?" as she had never seen one before. As cassettes were described to her she inquired, "Do you mean we have to wrap these up like gifts each and every time we want to package a cassette?" Although this was a new and innovative idea to her, she listened to the cassette controversy within the office, and ultimately agreed to remain open and receptive to a new way of instrument management.

The decision to implement cassettes

Dr. Thomas explored costs involved and space considerations in cassette implementation and assured Dr. Dale that their usage would enhance the practice by streamlining instrument processing, enhanced organization of instruments, time savings, as well as reduction in accidental exposure incidents. After discussion and debate among the dentists and staff members, the team ultimately decided to adopt the IMS and process their instruments in cassettes.

Part two of this article will discuss the preplanning considerations of the IMS system, the grand opening of Drs. Dale and Thomas's dental practice, and the staff perceptions at the one-year anniversary of their new practice. Part two will be published next month.

Marie T. Fluent, DDS, is a graduate of the University of Michigan School of Dentistry. She has enjoyed 25 years of practice in Virginia, Maryland, and Michigan. Dr. Fluent is on the Editorial Board for The Dental Advisor and lectures on dental materials and infection control. Email: mtfluent@yahoo.com.