Kleinheinz Dentistry has undergone a resurgence of late, following a loss to the tune of about $5,000 from a poor marketing investment in late 2017. 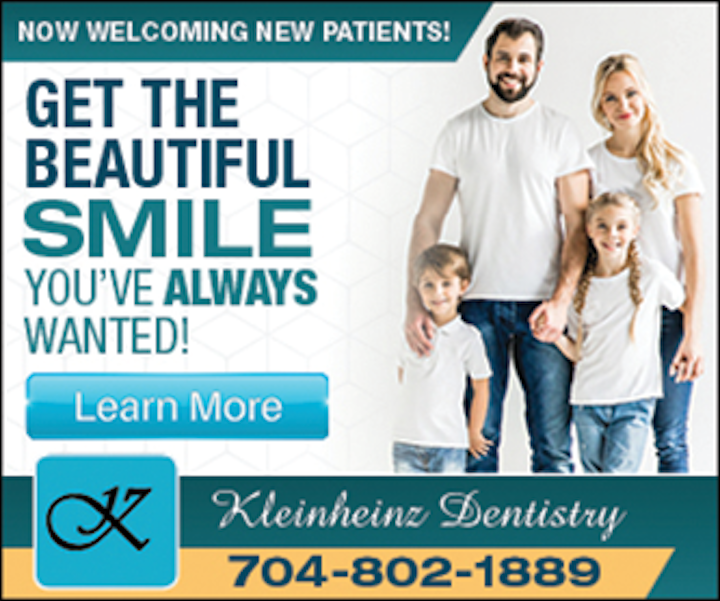 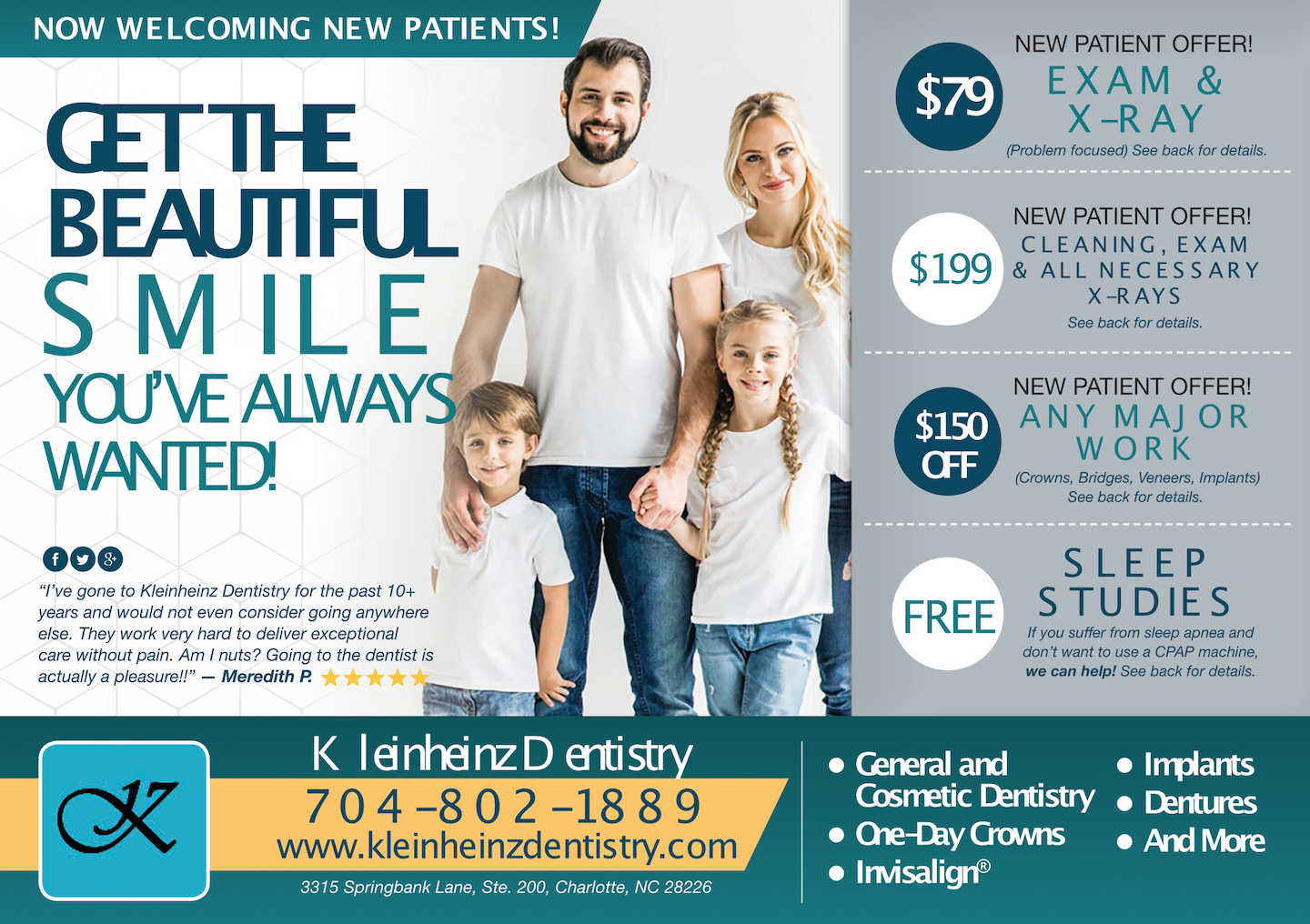 Kleinheinz Dentistry, led by owner-dentist Dr. Kleinheinz (Dr. K) and office manager Jay Yuckel, is a general dental practice in Charlotte, North Carolina. The practice has undergone a resurgence of late, following a loss to the tune of about $5,000 from a poor marketing investment in late 2017. Since then, they’ve bounced back and marketed the practice shrewdly, increasing monthly new patients by 87.5%, monthly production by 34.9% and full-time staff by 100%. Let’s take a look at what it takes, marketing-wise, to generate results like that. Get out your red sharpies and reading glasses — it’s evaluation time! (Follow along by looking at the corresponding letter in the marketing materials.) 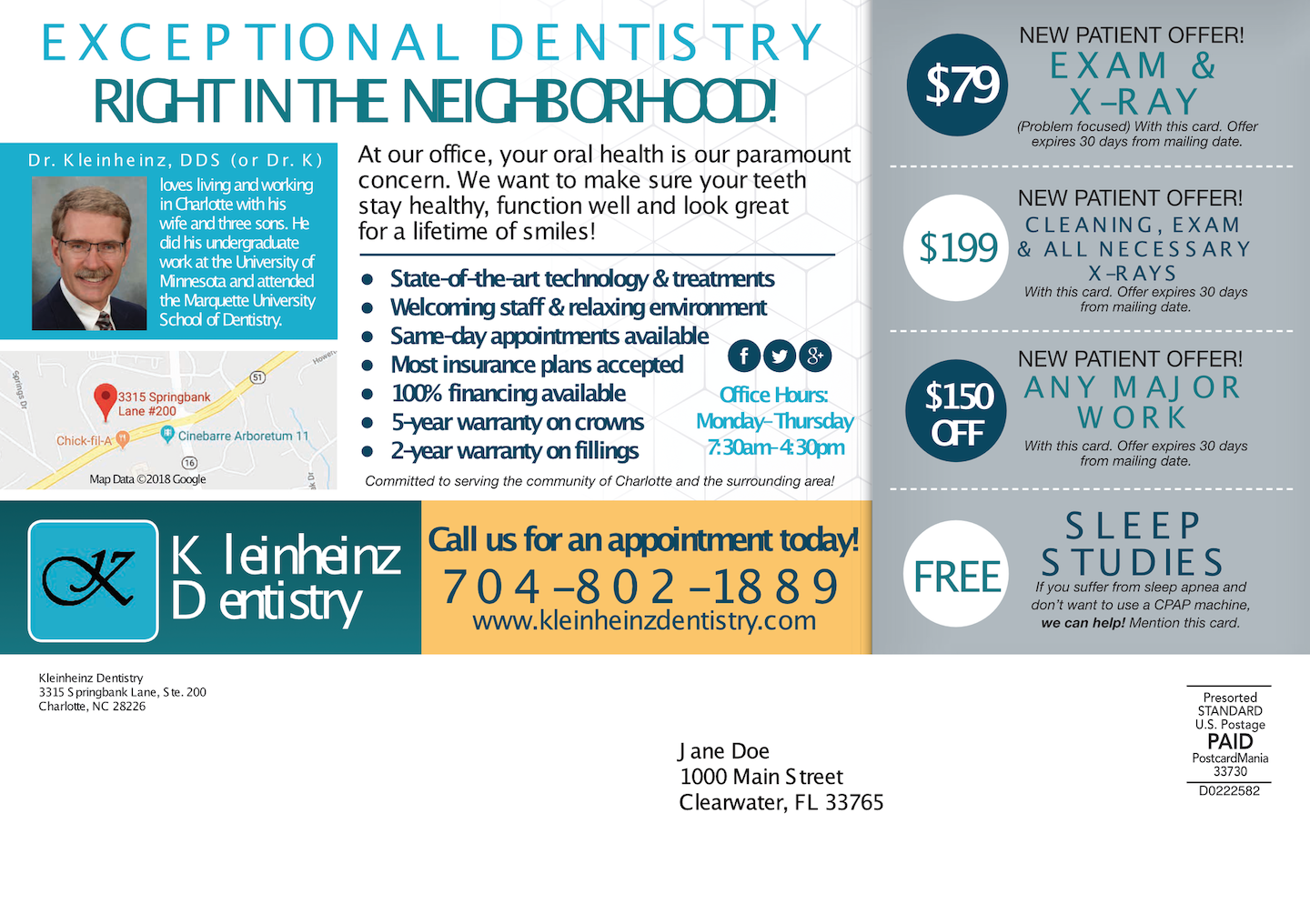 Remember that $5,000 marketing loss I mentioned? Well, it came at the hands of a poor newsletter-style direct mail campaign that utilized a shotgun targeting approach. That means they basically targeted everyone within a certain radius around their location. Thankfully, not every direct mail campaign is considered equal. Let’s look at how this postcard campaign stacks up.

A: Nothing says “family dentistry” like a smiling family front and center. Plus, our proprietary success data indicates that 87% of our successful dentistry campaigns include a photo of one or more people smiling, so be direct with your imagery.

B: Build value in the minds of prospective patients with quality offers. According to our data, 62% of successful dentistry campaigns include two (or more) offers.

C: I always suggest that businesses feature their main call to action in an entirely different, unrelated color. This will draw attention (and hopefully lead prospects) to your website and phone number, both of which should be optimized to capture that lead.

D & E: Use Google’s ubiquity to your advantage. Google maps are a great way to show prospects your exact location. And don’t forget those reviews! It’s time to replace that old, tired testimonial with a five-star graphic and legitimate Google review. Square surveyed over 1,800 US consumers last year and found that Google Reviews ranked as consumers’ top source for online reviews, followed by Facebook.1

F: As the dentist, you get up close and personal with your patients. So it’s important to build trust from the get-go with a real photo and a short bio that shows prospects you’re a real person.

G: Besides switching from a newsletter format to a postcard, the biggest change between this campaign and the one that resulted in a net $5,000 loss was the mailing list. By narrowing their target market from everyone within a radius to specific zip codes and postal routes based on income, this practice turned their loss into a huge gain.

H: I would be remiss not to mention the impact that consistency has had on this campaign. The more consistent their mailings are, the higher their new-patient numbers climb. Check out Figure 1 for the proof. 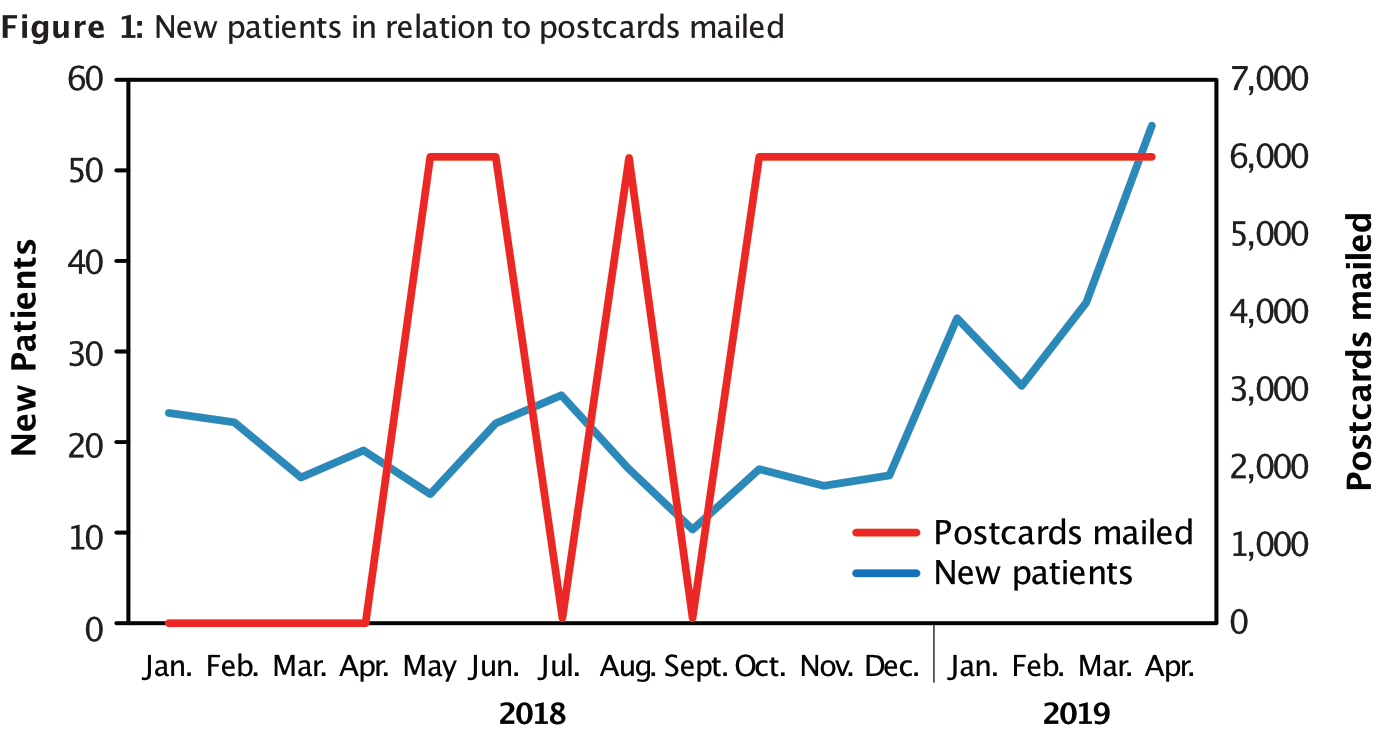 These display ads are shown on the Google Ad Network (which consists of millions of websites, from your local news stations to CNN) to the same prospects receiving postcards every month, so Dr. K gets brownie points for repetition right off the bat.

I: These ads alone have been seen 489,446 times on the Google Ad Network by the same people receiving postcards and have been clicked on 4,350 times, sending prospects directly to the practice’s website. That’s a great click-through rate (0.88%) for a display ad.

J: Coordinated online ads like these are an extremely cost-efficient way to increase your brand awareness exponentially and can increase response 98% to 400%.2

K: All components of this campaign feature a unique call-tracking number that tracks and records all incoming dials and conversations. So far, they’ve tracked 218 unique calls from the postcards and online ads.

The last piece of this campaign was another coordinated online ad—this time on the Facebook and Instagram platforms.

L: Facebook’s advertising rules dictate that the image portion of your ad cannot feature more than 20% text, but that rule has basically gone the way of banning all text entirely, which is why Kleinheinz Dentistry’s logo features so prominently.

N: So far, this ad has racked up 97,236 impressions and 454 clicks on the Learn More button, which sends prospects straight to their home page. 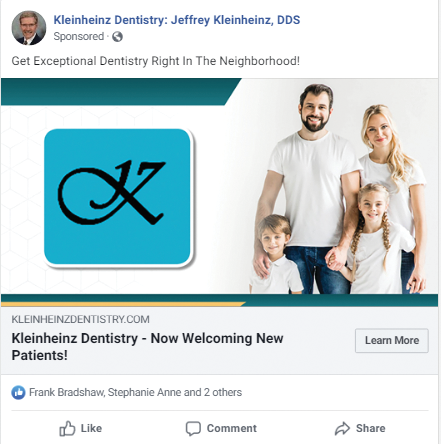 Dr. K’s home page is too long to include in its entirety on the pages of Dental Economics, so we’ll be looking at only the most important parts of the page—the first portion you see when you land on the page, and what happens when you attempt to request an appointment using their online booking system. (Note: Dr. K’s website is completely responsive to the device on which you’re viewing it, and we’ve chosen to display the website’s mobile version.)

O: Thanks to an up-front logo and practice name, you immediately know you’re in the right place. Usually I would suggest a main headline that conveys benefits for a home page, but in a ubiquitous field like dental, the prospect usually understands the benefits of dental care. And because dentistry is so competitive, reinforcing your name and brand right away on your website is a shrewd marketing idea—and I like it!

P: While I like that this family photo recalls the family photo utilized in Dr. K’s external campaign, it would be ideal if the exact same photo could be used on the home page, along with the same shade of blue.

Q: When you click this button, a form pops up immediately on top of the home page. It works perfectly and seamlessly, which earns them big points.

R: Dr. K’s appointment request form strikes a good balance between having enough forms to seem as though you’re actually booking an immediate appointment (rather than just asking for someone to call you, which can put off some dental prospect) and not asking for too much information, which could scare off others. 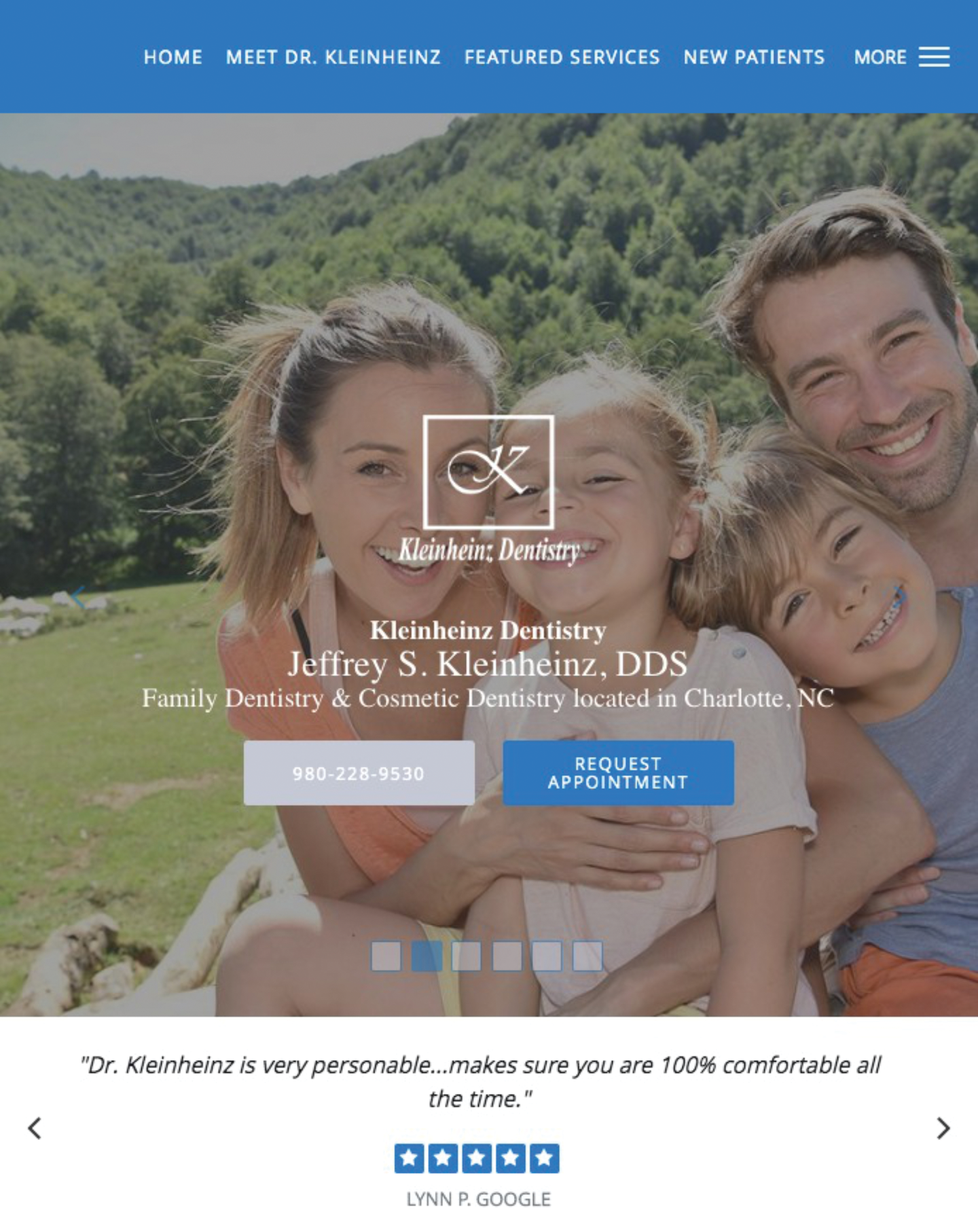 With their entire campaign laid out above, it should be obvious that Dr. K and Jay have built an efficient lead-generation machine—without neglecting the importance of capturing those leads. They’ve employed key lead-capture mechanisms, such as:

• Call tracking to capture every number that dials in (even hang-ups) so those prospects can be followed up with later
• Excellently programmed website forms to make it easy for prospects to go from anonymous site traffic to qualified leads
• Consistent “request appointment” calls to action featured consistently all over the website, pointing traffic toward those aforementioned forms
• Call recording (which comes with call tracking by default) that allows management to review calls later and troubleshoot any issues with the lead capture process

Too often I see dentists and business owners neglect the lead-capture portion of their marketing scheme. Kleinheinz Dentistry is an undeniable case study in what a good lead generation and lead caption system can do for a practice. 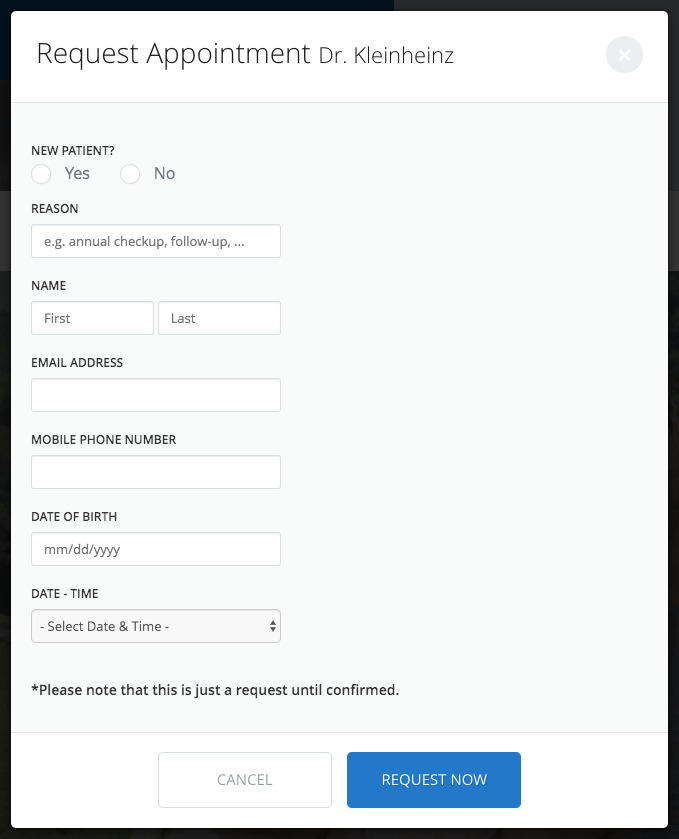 JOY GENDUSA is the founder and CEO of PostcardMania. Using just postcards, a phone, and a computer, Joy built PostcardMania from a one-person start-up into an industry leader. PostcardMania serves 86,537 clients, including 6,288 dentists. Need help promoting your practice? Call one of PostcardMania’s dental marketing consultants at (844) 269-1836 or email Joy at joy.gendusa@postcardmania.com.