Dr. Fred Abeles gave up dentistry for music, but finding the perfect niche changed his tune. 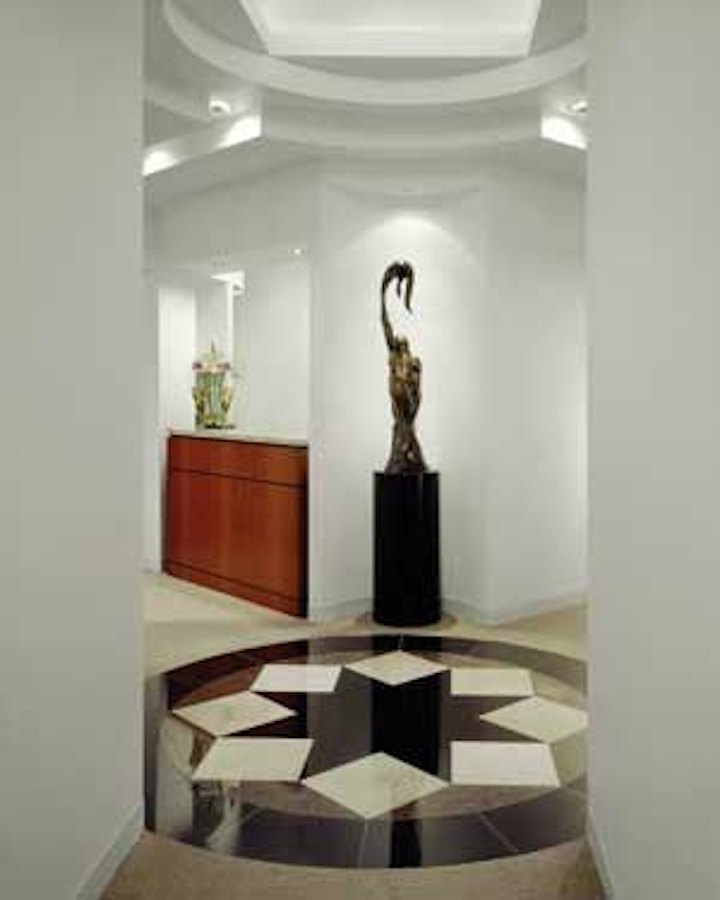 There’s a huge part of me that’s just an artist,

“I designed my office, designed my Web site, and I love being able to design the smiles we do for our patients,” he says.

The 54-year-old is a concert pianist who has entertained Presidents Ford, Reagan, and Bush, in addition to many celebrities. But in 1983, life as a dentist left Dr. Abeles searching for his own smile. He even exited the profession for a full-time career in entertainment.

“I learned years ago to stop doing things you don’t enjoy doing,” he says. “I say do what you love.”

His first love revealed itself at a young age. Something almost magical happened in Altoona, Pa., when 5-year-old Abeles, donning a requisite set of ears, first gripped his Mickey Mouse accordion.

“My parents said I just started playing,” Dr. Abeles says. “They saw I had some talent, so they got me the best teacher they could find.”

He began performing on the piano at age 6. That love for music continued through college, where he declared a minor in music and a major in premedicine at Washington and Jefferson College in Washington, Pa., just south of Pittsburgh. The third-oldest college in the United States, “W&J” opened in 1781.

“After graduating, we found our way to Atlanta, and I’ve been here ever since,” Dr. Abeles says. “My wife, Rhona, and I have been married 31 years.”

Dr. Abeles was drawn to dentistry in search of autonomy and creative license. He graduated from Emory University School of Dentistry in 1977.

Nevertheless, he found himself growing bored with routine procedures and increasingly aggravated with insurance games.

“I was so disenchanted with dentistry in the beginning that in 1983 I actually left the profession completely for a few years,” Dr. Abeles says. “I became an entertainer. I felt life was too short to be unfulfilled. Rhona was supportive during those years.”

Dr. Abeles landed a job as an entertainer and music director at Atlanta’s Waverly Hotel, which was newly opened.

“Very quickly I found myself with a whole new career,” he says. “I never told anyone I was a dentist in those years.”

Somehow, word leaked to the Atlanta NBC affiliate, which in turn broadcast a feature story on television about the piano-playing dentist.

“I really got back into dentistry on a fluke,” Dr. Abeles says.

A few of his co-workers at the hotel saw the segment and approached Dr. Abeles about performing a little dental work on them.

He obliged - again and again. The demand for dentistry grew so great that Dr. Abeles began sharing an office space with another dentist.

“Things slowly grew, and I went out on my own,” he says. “It wound up becoming a large, insurance-driven practice. It almost came full circle.”

In 1993, Dr. Abeles changed his tune. He began attending the Pankey Institute and Las Vegas Institute for Advanced Dental Studies. He slowed down his practice and focused on what mattered most to him - relationships with patients and the kind of dentistry he wanted to do.

“I said, ‘Look, I really want to dedicate myself to become the best dentist I can become,’” Dr. Abeles says. “Doing porcelain veneers, smile makeovers, and full-mouth reconstruction cases are the most enjoyable. I like taking a patient who may not have a lot of self-confidence, and we contribute in our way and change that life. It’s a lot of fun to do, and the appreciation factor is a lot higher.”

Dr. Abeles credits much of his ambition and success to his mentors, who include Drs. Bill Dickerson, founder of LVI; Ron Jackson; William Strupp, founder of the William C. Strupp Postgraduate School of Dentistry; Mike Schuster, founder of the Schuster Center for Professional Development; and Peter Dawson, founder and director of the Dawson Center for Advanced Dental Study.

A year after vowing to do things his way, Dr. Abeles moved into an 1,800-square-foot office space that backs up to the Chattahoochee National Forest.

“It’s got an understated elegance. I call it a timeless, classical design,” he says. “I wanted to avoid anything I thought some people would bill as the latest, trendy thing in architecture. I’ve always felt ‘don’t shout it,’ so instead, I’ve got all original art and sculpture throughout the office. I let people discover what we’re about through us.”

That means no before-and-after photos grace the walls as art. His hallways resemble those found in museums more than those found in any typical dental office. On another note, the music library of more than 1,000 CDs ensures patients are exposed to various forms of art.

From the hallway, patients may be directed to one of four treatment rooms. A technology room houses imaging programs, a diode laser, and computer and diagnostic equipment. Dr. Abeles treats patients in either of two front rooms. Another room is reserved for hygienist Crystie Gaskie. Rhona works from the front desk, and Angie Nester works as his dental assistant.

“They’re all very dear friends,” Dr. Abeles says. “Surround yourself with talented, high achievers, then get out of the way - that’s what I do. Having a team of three allows me to work less and still have a very high profit, so based on that, we don’t need to see a large volume per day.”

He works 9 a.m. to 5 p.m. some 150 days a year. The practice is entirely insurance-free, and revenues are roughly two to three times the national average.

“It’s a completely individualized experience for people to come in and visit with us,” Dr. Abeles says. “My patients expect a more personalized and individualized visit than they’ve ever had. They spend more time with the doctor than they’re used to.

“I think dentists have been taught to be efficient. We all have this emphasis on high technology, and a lot of dentists have lost what it takes to be effective. We need to spend more time with people. My office is inefficient, in effect, to be more effective. I think a lot of dentists delegate too much and rely too much on technology, and a lot of these dentists find they aren’t doing as much cosmetic dentistry as they would like. Develop relationships with patients first, then they will authorize you to do the cosmetic dentistry.”

Dr. Abeles focuses on internal marketing, rather than big-time advertising campaigns. His typical patient is someone between 30 to 50-something who places a high value on health and wants to look and feel better.

“It’s an individual who does not want to have to choose a health care provider based on a name on a list,” he says. “Patients pay for 100 percent of treatment at the time of treatment. I think when we can exceed someone’s expectations, there is a much higher likelihood of talking about us and referring to us.”

Since finding his dental niche, Dr. Abeles has found the perfect two-part harmony with his music and his profession. He’s a regular performer at Atlanta-area charity events, and he coaches other dentists who haven’t found their niches yet.

“I try to teach dentists how to create like artists,” he says. “When Beethoven created a symphony, he didn’t do it because he was trying to win an award or make a million dollars. Create for the sake of creating.

“I do a lot of speaking throughout the United States and Canada on clinical programs, ‘Creating a True Cosmetic Practice,’ and ‘A Brand New Day.’ It’s motivational and inspirational. I talk to dentists who are kind of stuck in their careers and know they are not enjoying their jobs and lives as much as they want. Now I absolutely love what I do.”

Dr. Abeles has been an LVI speaker for five years and has spoken at the LVI Extravaganzas, American Academy of Cosmetic Dentistry, and many other major meetings.

7 tips for being an A-list specialist

Does financial planning end at transition?

Giving the 'right' way can have a favorable tax impact for dentists. Giving via their stocks, timing the gift correctly, and knowing how to donate from retirement funds can all make a difference.
Nov 9th, 2017

Advancing relationships in a fast-paced world

Developing a relationship with them is important to your dental patients. They appreciate it when you take an interest in them outside of their dental visit. Here's how you can build those relationships.
Roger P. Levin, DDS
May 1st, 2017

Dr. Chris Salierno, chief editor of Dental Economics, talks about the dental profession's progress in the area of access to oral health care for those who need it most.
Chris Salierno, DDS
Mar 1st, 2017
Dental Outreach

The Open Door Foundation is a federally registered organization based in Edmonds, Washington, that I started about 10 years ago with a few friends and family.
Nov 15th, 2016

When we as practice owners think about investing in new technology, myriad questions arise.
Oct 26th, 2016

Financial advice for dentists: Crossing the Rubicon and 'financial death'

As a dentist, figuratively 'crossing the Rubicon' is not always a bad thing. But think very carefully about what you are about to do.
May 19th, 2016

Working as an FQHC dentist

'I love to hear stories from dentists when they return from doing dental outreach with underserved patients; they are so excited and proud of the work they have done,' says Gregory Maddalena, DDS. In this article, he explains what it is like to work day-to-day as a dentist in a federally qualified health center. He discusses the advantages to those who may possibly be seeking public health careers.
Apr 19th, 2016

Positive online reviews and reputation management: More important than ever for dentists who work with children